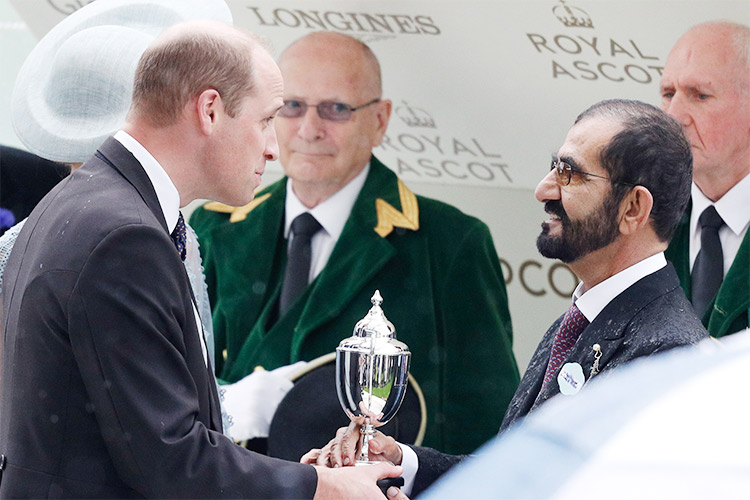 Blue Point joined a select group of sprinters to win the G1 King’s Stand Stakes twice with another scintillating display in the five-furlong highlight on day one of Royal Ascot on Tuesday.

The five-year-old Shamardal horse showed his customary early speed from stall one and disputed second towards the far side of the main group of runners down the centre of the course headed by Soldier’s Call, with Battaash and Houtzen racing together on the stands’ side.

All 12 runners converged at the half-way point, with Blue Point quickening strongly to take up the running from Soldier’s Call with nearly a furlong and a half to race.

Battaash laid down a strong challenge entering the final half-furlong, but Blue Point found more and ran on strongly in the closing stages to win impressively by a length and a quarter in a fast 58.53s on good ground, with a further length and a half back to Soldier’s Call.

It was a third G1 victory for the Appleby-trained sprinter, who also beat Battaash into second in the 2018 King’s Stand Stakes and started the year with three easy victories at Meydan, UAE, headed by an impressive display in the G1 Al Quoz Sprint.

Vice President, Prime Minister of the UAE and Ruler of Dubai His Highness Sheikh Mohammed Bin Rashid Al Maktoum, who graced the occasion, said: “That has given me a lot of pleasure. When you win a Group One, you are very happy.

“Blue Point was in Dubai during the winter and the weather there helped him. He came here a stronger horse.

William Buick, who won on Blue Point 12 months ago, is currently sidelined following a case of concussion and so James Doyle stepped in for the ride today.

Appleby said: “During the winter, Blue Point did nothing but impress us with the way he matured both mentally and physically. When William won on the horse on his first start this year he said we’re dealing with a different horse now. In training we could see that.

“Coming into today’s race, I knew he was in the form of his life. Physically he looks the real deal. Two weeks ago James rode the horse in a bit of work and came back saying ‘the ground is a bit loose’ and all the usual excuses you come up with when a gallop doesn’t go quite according to plan, but I hoped the horse would come forward for that.

“Then last Wednesday he rode him again and the horse was electric. James got off him and said, ‘That’s the fastest horse I’ve ridden’, and we saw what he meant today.

“For Sheikh Mohammed and the Royal Family to be here is marvellous – the one thing we talk about all winter is Ascot, Ascot, Ascot. Once this meeting finishes on Saturday, we’ll start planning for next year. It’s a team effort and to get the horses here in the condition of their lives is all down to the team behind me, and for which I am very grateful. To get a winner is what it’s all about, and even better on the first day.

“William Buick is here today, he’s in the gym regularly and he’s looking great. With the way things are going, I would expect to see him back by the end of July. Having said that, he pushes himself so hard and if he told me next week he was ready to come back it wouldn’t surprise me. It is William’s call.”

Doyle commented: “It gives me immense satisfaction that I didn’t mess it up because I have ridden Blue Point twice before and it didn’t really work out.

“William gets on so well with him, so we did plenty of homework. Charlie actually told me a hop on Blue Point a couple weeks ago, just to get to know the horse because he can be tricky.

Earlier, the 14-1 Lord Glitters, trained by David O’Meara and ridden by Daniel Tudhope, won the opening race of the meeting — the Queen Anne Stakes.

Laurens hit the front two furlongs out, but then faded and finished sixth as Lord Glitters won, narrowly ahead of Beat The Bank and One Master.