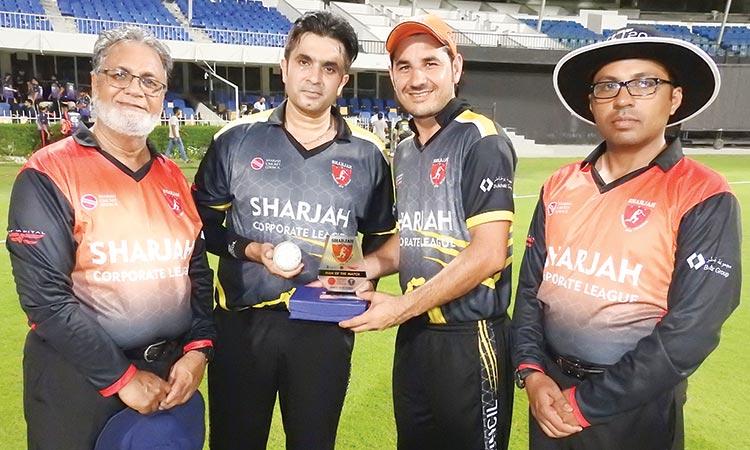 DHL’s Sagheer Afridi and Asif Shadab pose with the officials after sharing the man of the match award.

SHARJAH:  Sagheer Afridi and Asif Shadab shared the man of the match award after brilliant performances with the bat and ball in DHL’s big win over Emirate Islamic Bank in the Sharjah Corporate League at the Sharjah Cricket Stadium.

Afridi cracked a scintillating ton (107 from 65 balls, 5x6, 6x4) in taking DHL to 195 for 6 from 20 overs and later Shadab grabbed five wickets for 17 runs to bowl out Emirates Islamic Bank for a paltry 126 after Waqas Ali had done the damage by removing both the openers, including Adil Lanker who was their top scorer with 55.

In another match Renjith Mani carried his bat through the 20 overs to come up with a cracking unbeaten 109 in Jotun Paints 94 run win over Ramada Hotel.

Mani’s 109 came off 64 balls and was studded with three sixes and a dozen fours. Vishnu Ramesh chipped in with 37 and Bilal Murtaza remained not out  on 22 as Jotun posted 194 for 3.

Earlier, Shamsher Abdulla bagged five wickets including the first hat-trick of the tournament but his effort went in vain after Hamriya Free Zone Authority (HFZA) were outplayed by DHL at the Sharjah Cricket Stadium.

That didn’t stop Sagheer from playing aggressively during his 74 which came off only 32 balls and consisted seven sixes and six fours.

In reply HFZA were struggling at 98 for 7 until Shamsuddin Odiparakodi ‘s 77 (48b, 6x6, 5x4) gave the total some respectability. But he didn’t receive enough support and HFZA were restricted to 168 for 8.