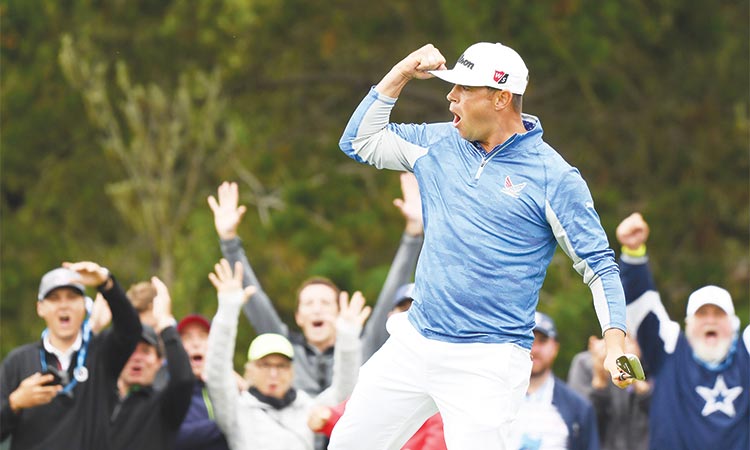 Gary Woodland celebrates after taking the lead at the US Open on Saturday. Agence France-Presse

Pebble Beach: Gary Woodland delivered a gritty back nine display on Saturday, coming up with key par saves in a two-under 69 to stay one stroke in front of Justin Rose heading into the fourth round of the US Open at Pebble Beach.

Woodland, a three-time US PGA Tour winner, in search of his first major title, finished 54 holes with on 11-under 202 to stay in front of former US Open champion Rose, who capped his three-under 68 with a birdie at 18 for a 10-under total of 203.

It was another three strokes back to a group headed by two-time defending champion Brooks Koepka, who stayed within striking distance of a fifth major title with a 68 for seven-under 206.

Woodland, who stretched his two-shot overnight lead to as many as four on the front nine, led Rose by three after a birdie at 11.

He was facing a dropped shot at 12 after finding the rough on the lip of a bunker, but chipped in to save par, preserving a two-shot lead as Rose drained a nine-foot birdie putt.

After rolling in a four-foot par-saving putt at 13, Woodland produced another unlikely save, draining a 42-foot putt at the par-five 14th -- where Rose also birdied.

“I felt really comfortable today, comfortable with my game,” the 35-year-old said. “I’m excited to be where I am right now.” Woodland’s nine-foot birdie putt burned the edge at 18, where Rose closed the gap with his fifth birdie of the day.

Rose and Woodland both set themselves up for the weekend with rounds of 65 -- Rose on Thursday and Woodland on Friday -- matching the lowest US Open round ever posted at Pebble Beach and first achieved by Tiger Woods in 2000.

On another cool, overcast day Pebble Beach continued to offer birdie chances, but there was plenty of danger lurking among the spectacular ocean views.

Woods was going the wrong way early after bogeys at the first and third. His five birdies were more than he made in the first two rounds combined, but were balanced by five bogeys.