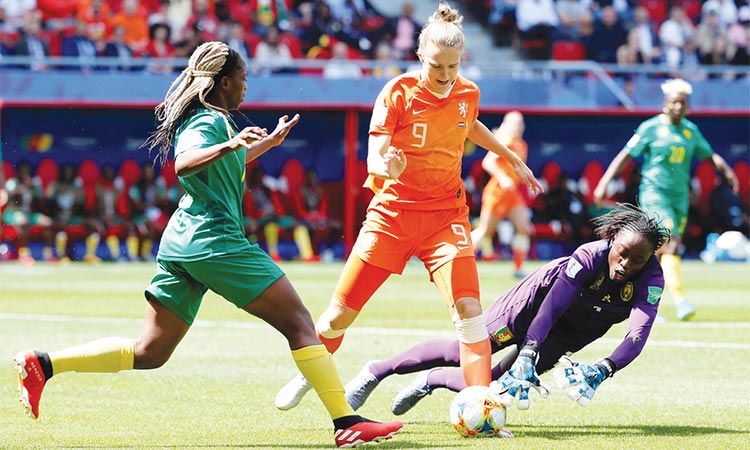 Vivianne Miedema scored twice as the Netherlands saw off a spirited Cameroon 3-1 on Saturday to secure a place in the last 16 of the women’s World Cup.

Miedema’s goals came either side of a close-range Dominique Bloodworth strike for the European champions in Valenciennes, with Gabrielle Aboudi Onguene netting for Cameroon.

The Netherlands have won two out of two in Group E and their place in the knockout rounds is therefore secure before they take on Canada in Reims next week.

Sarina Wiegman’s team were helped by a huge Dutch support which turned the Stade du Hainaut into a sea of orange, with around 15,000 fans expected in the northern French town which lies only a two-hour drive across Belgium from the southern Netherlands.

Those supporters saw their team take the lead in the 41st minute through a fine goal, with exciting winger Shanice van de Sanden playing a one-two with Jackie Groenen before crossing for Miedema to head home.

The lead lasted only two minutes, though, with Aboudi Onguene latching onto a long ball forward and rounding goalkeeper Sari van Veenendaal to score.

However, the Dutch restored their lead within three minutes of the second half starting, with the Indomitable Lionesses failing to deal with a well-worked free-kick and the ball falling for defender Bloodworth -- who plays with Miedema at Arsenal -- to convert.

Substitute Lineth Beerensteyn then played in Miedema to run through and blast in their third late on, with that strike also taking the 22-year-old forward onto 60 international goals and making her the all-time top scorer for the Netherlands women’s side.

Canada can also clinch qualification for the last 16 with a win over New Zealand later in Grenoble.

Meanwhile, in Friday’s last match, Jodie Taylor broke a 14-month goal drought to shoot England past Argentina and into the last 16.

Euro 2017 top scorer Taylor tapped home her first England goal since April 2018 from Beth Mead’s inviting low cross just after the hour mark to send England to the top of Group D on six points, two ahead of Japan, and into the next round alogside Italy, France and Germany with a game still to play.

“I’m the first one to admit that I score goals because of my teammates. The Euros I won the golden boot because of the quality of my teamates,” Taylor told reporters.

“The ball from Beth today absolutely showed that.”

Phil Neville’s side now need a point in Nice on Wednesday against Japan, who beat Scotland 2-1 earlier on Friday, to ensure they finish in first place and avoid a potential clash with European champions the Netherlands in the next round.

They could form part of a powerful group of teams in the knockouts with the three strong-looking European nations plus the USA, who are heavy favourites to go through from their group.

“To be honest I’m so focused on the group I don’t even know who we could face yet,” added Taylor about the prospect of facing one of those sides.

“We want to top the group, that’s all we want to focus on -- ask me after Japan.”

Despite the defeat the ‘Albicelestes’, third in the group with a point, can still qualify for the knockout stages if they beat Scotland in their final game in Paris, although they will have to show more attacking intent than they have in their opening two matches.

Phil Neville hailed the togetherness of his England side after they joined Germany, France and Italy in the last 16 of the Women’s World Cup.

“I thought they were outstanding, we asked them to play with patience, control, rhythm, with speed, and we dominated the whole game like we did against Scotland apart from 11 minutes,” said Neville.

England travel to Nice with their destiny in their hands after an emotional night for Fran Kirby, who lost her mother to a sudden brain haemorrhage when she was just 14, and Carly Telford.

Friday would have been her mother’s birthday. Goalkeeper Telford, who played her first minutes in a major tournament on Friday, lost her mother to cancer last year.

“We’re a family. We were aware today that it was Fran’s mum’s birthday. It’s been well-documented the love and affection she had from her mother and how much she misses her,” Neville said.

“We hope their two mums would be looking down on them and be very proud of their performances.”