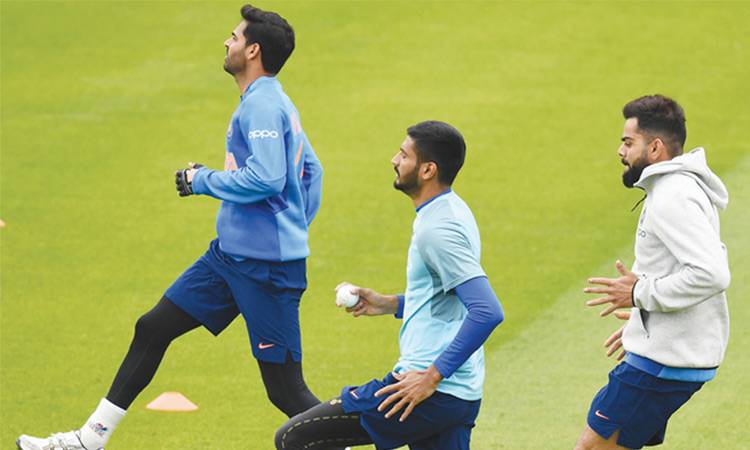 After having their last fixture against New Zealand washed out, the Indian team will be raring to take the field when they face arch-rivals Pakistan in the most anticipated clash of the ongoing World Cup at the Old Trafford on Sunday.

Virat Kohli will have history on his side when his side will India take on neighbours in a blockbuster — a clash that is always more than just a game of cricket.

Having secured convincing wins over South Africa and Australia in their first two matches, the Men in Blue were not even able to get on the field for their third match against the Black Caps which was called off due to rain.

Against Pakistan, India have a perfect record as they have won all their six encounters in the previous editions of the showpiece event and thus, Kohli’s men would be brimming with confidence considering their past record against the arch-rivals.

However, it would not be that easy this Sunday as they would be without the services of their in-form opener Shikhar Dhawan. The opener got injured during the match-winning knock he played against Australia at The Oval in London on June 9. He has been sidelined for at least two-three matches with a fractured thumb.

In his absence, KL Rahul will open the innings with seasoned campaigner Rohit Sharma. Kohli would be hoping that the duo give them a solid start and lay the platform for him and the other batsmen in the middle-order.

Kohli downplayed the frenzy and excitement surrounding the high-octane clash, with more than a billion people set to tune in, but said the “intimidating” atmosphere would bring out the best from his players.

“For Sunday, we know we’re there when it comes to the mindset. Just about going out there and having a game plan, executing it,” said Kohli.

“As soon as you enter the field, it’s calm and relaxed. The atmosphere from the outside, for the first time, it’s a bit intimidating, but we’ll look to execute well. “It’s been competitive for years. It’s a marquee event all over the world, an honour to be a part of the big game. Brings out the best in all of us.”

India’s bowling has also been pretty good with all the four bowlers -- Jasprit Bumrah, Bhuvneshwar Kumar, Yuzvendra Chahal and Kuldeep Yadav — among the wickets.  Pakistan, on the other hand, would be aiming to break the jinx and secure their first World Cup victory against India. However, it would require a formidable performance for the 1992 champions to overcome Kohli’s men.

The Sarfaraz Ahmad-led side made a horrible start to their World Cup campaign as they suffered a crushing defeat against West Indies in their tournament opener. However, they came back strongly and registered a remarkable win against England. But against Australia, they failed to maintain their consistency and had to face a 41-run defeat in Taunton.

Pakistan skipper said his team needed to learn from their mistakes to get past a powerful Indian side.

“We have to overcome our mistakes because India are also a very strong team. We will assess our performance and then we will plan,” he said.

Passionate fans of both sides want local bragging rights even if their team ultimately goes on to lose the tournament.

Against the reigning champions, Pakistan bowlers made a strong comeback in the latter half of the innings, but it was the batting effort that let them down. And so, Sarfaraz may be tempted to bring in Haris Sohail into the playing XI in place of Shoaib Malik, who has failed in each of his three outings in the tournament so far.

Also, one thing which Pakistan would definitely want to improve is their fielding. Their fielding has not been upto the mark and they have dropped many catches in the four games they have played so far.

Going by the record and form of both the teams, the odds look completely in favour of India but Pakistan -- capable of beating any opposition on their day -- will look to replicate their 2017 Champions Trophy final performance.

However, one thing which can ruin the mood of both the players and the fans is rain. The weather forecast for Sunday is not great and there are chances of rain in the afternoon which can play a big role in the result of the match. Teams batting second have won four of the last five matches at Old Trafford and with rain expected to play its part, both captains will be tempted to field first.

The two teams have played each other in 131 ODI games, with Pakistan having a clear edge with 73 wins, despite their poor record against India at World Cups.