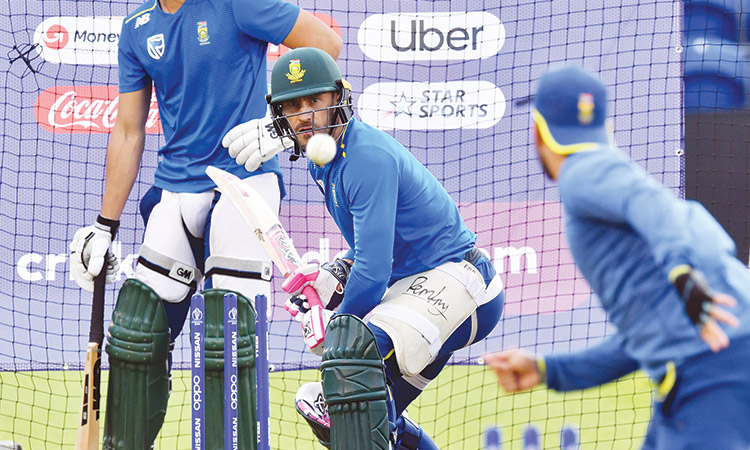 Cardiff: Faf du Plessis has urged South Africa to forget about their World Cup woes and focus on securing their first victory of the tournament against minnows Afghanistan.

Du Plessis’ side face Afghanistan in a must-win match in Cardiff on Saturday after a wretched start to the World Cup.

Defeats against England, Bangladesh and India and a wash-out with the West Indies have left Proteas captain Du Plessis admitting South Africa must win their five remaining games to have any prospect of making the semi-finals.

And the batsman believes the only way for South Africa to achieve that unlikely target is to put their struggles behind them and focus only on the present.

“Week one was a bad start to the tournament but that’s done now,” Du Plessis told reporters on Friday.

“We’ve got to put all our energy and focus into the now and what’s coming up next.

“I truly believe that if we carry those ghosts of the last week with us it’s going to be tough to get out of the hole.

“But the conversations in the last couple of days, especially with all the rain around, has given me more time to make sure that the guys are on the right path.” South Africa have the perfect opportunity to kick-start their campaign as Afghanistan have lost their first three games and are the only side below them in the table.

“We’ve got to win the five games and that clarity is what we’re trying to achieve,” Du Plessis said.

“There was a bit of space for us to make a mistake here or there before, but now everyone has written the team off our backs are against the wall.

“Hopefully that allows the guys to play the way that we can, and I truly believe that if we do that we’ll be a very dangerous team.”

Fast bowler Lungi Ngidi could return to the South Africa attack after missing the last two games with a tight hamstring. Ngidi pulled up after bowling just four overs in The Oval defeat by Bangladesh on June 2, and missed the six-wicket loss to India as well as the West Indies wash-out on Monday. “It’s a tricky one with fast bowlers as to when they do come back. We’re in a position now where we need to win five games out of five so you want your best available for selection,” Du Plessis said.