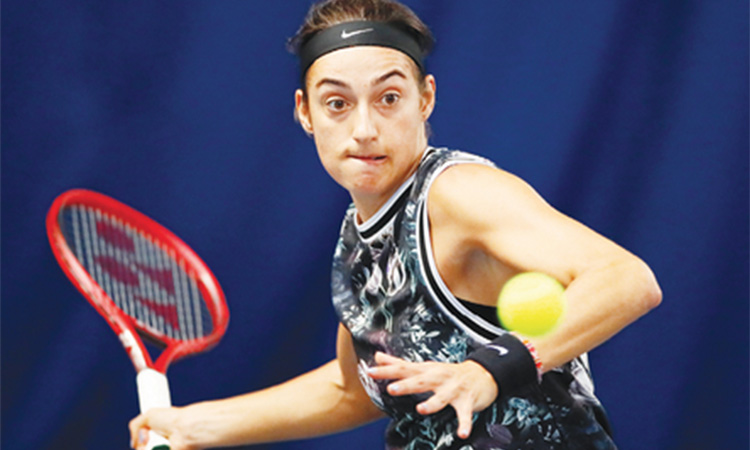 Caroline Garcia in action against Maia Lumsden (unseen) during their second round match of the Nature Valley Open in Nottingham on Thursday. Reuters

Italian Matteo Berrettini cruised into the Stuttgart Open last four on Friday after making light work of American Denis Kudla with a 6-3 6-3 win in just over an hour.

The 23-year-old world number 30, who beat second seed Karen Khachanov in the previous round, looked at ease on the grass court of the Wimbledon warm-up event, despite having won his two tour titles to date on clay.

He grabbed his only break chance to win the first set and his big serve never allowed his American any chance to break back.

He comfortably held serve throughout, firing 10 aces in total, and broke the American again at 2-2 to cruise to victory a little later with a superb forehand down the line on match point.

Zverev saved four set points on his serve at 5-3 in the first but could do nothing to stop the 34-year-old Brown from serving out the first set a game later.

The world number five, who has never won a title on grass, improved in the second and quickly broke in the second game to race 5-2 clear.

Yet Brown continued to mix it up and broke back to level at 6-6 before his opponent, who served 14 double faults, clinched the second set 7-3 in the tiebreak.

Brown saved three break points at 3-3 in the third and never looked back, racing to finish it on his first match point.

Elsewhere, top seed Caroline Garcia powered past British wildcard Maia Lumsden in straight sets to book her second quarter-final of the year at the Nature Valley Open in Nottingham.

Garcia had little trouble in the last round, beating another British wildcard, Naiktha Bains, in straight sets, 6-1, 6-2. She continued her fine form in the second round against Lumsden, needing just 53 minutes to score a 6-3, 6-1 victory.

No.280-ranked Lumsden was the last British woman standing out of the six that started in Nottingham, after Harriet Dart’s 6-7(5), 6-1, 6-2 loss to Ajla Tomljanovic earlier in the day. She fought admirably during the opening exchanges against Garcia, even fighting off three break chances to hold for 2-2, but she couldn’t keep pace after the top seed found her rhythm.

Garcia scored the decisive break at 4-2, coming forward and pressing at the net - especially on the returns where she looked to take time away from her opponent.