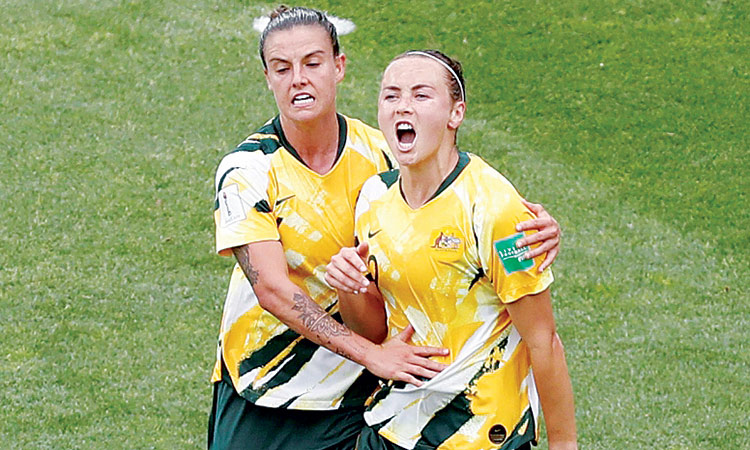 Australia fought back to beat Brazil 3-2 in Montpellier on Thursday and keep their Women’s World Cup hopes alive.

Veterans Marta, from the penalty spot, and Cristiane, with her fourth goal at this World Cup, put Brazil two up after 38 minutes.

But they cracked under the Matildas’ relentless barrage of crosses.

First, Barbara reacted too late to Chloe Logarzo’s low cross and allowed it to bounce into the net in the 58th minute.

Then, Monica headed a long, hopeful Australian punt into her own net after 66 minutes with the goal standing after a VAR review. The defeat could signal a changing of the guard for Brazil.

Marta, who has been battling injury, and 41-year-old midfielder Formiga, on a yellow card, went off at half time.

Cristiane, who is 34 and had scored her 11th total World Cup goal, followed with 15 minutes left and her team in desperate need of a goal.

The result leaves Australia and Brazil tied with Italy, who play their second match against Jamaica in Reims on Friday, atop Group C.

The forgiving format means the top three teams could go through to the last 16.

In Wednesday’s late match, Eugenie Le Sommer fired Women’s World Cup hosts France to the top of Group A after scoring the winning penalty to see off determined Norway 2-1 on Wednesday, while Germany virtually assured themselves of missing the rampant United States in the last 16 after squeezing past Spain and taking control of Group B.

Lyon star Le Sommer fired home from the spot with 18 minutes left after referee Bibiana Steinhaus decided after a VAR review that Norway defender Ingrid Syrstad Engen had kicked Marion Torrent on the knee after making a hash of a clearance.

The 30-year-old’s second goal of the tournament put France on a perfect six points after two games and saved the blushes of her club teammate Wendie Renard, who had cancelled out Valerie Gauvin’s 46th-minute opener for ‘Les Bleues’ with a barely-believable own goal.

Le Sommer stepped up to save the points and put them to within a point of topping the group ahead of Monday’s final match against Nigeria, who saw off South Korea 2-0 in Wednesday’s early match thanks to a a comical own goal from Kim Do-yeon and a superb burst and finish from Asisat Oshoala.

France are three points ahead of both Nigeria and Norway, who now need to hold off South Korea to be sure of arriving AT the knockout stage.

Thomas Dennerby’s Nigeria meanwhile are eyeing a first qualification to the knockout stage for 20 years after just their second World Cup win in that time.

Meanwhile, Scotland’s Shelley Kerr says her team remain optimistic they can make it beyond the group stage at their debut women’s World Cup as they prepare to face former champions Japan on Friday.

The Scots are bottom of Group D after falling to a battling 2-1 defeat against England in their opening match and now need a result on Friday to at least stay in touch with Japan and Argentina -- who take on England in La Havre -- in the hope of reaching the last 16.