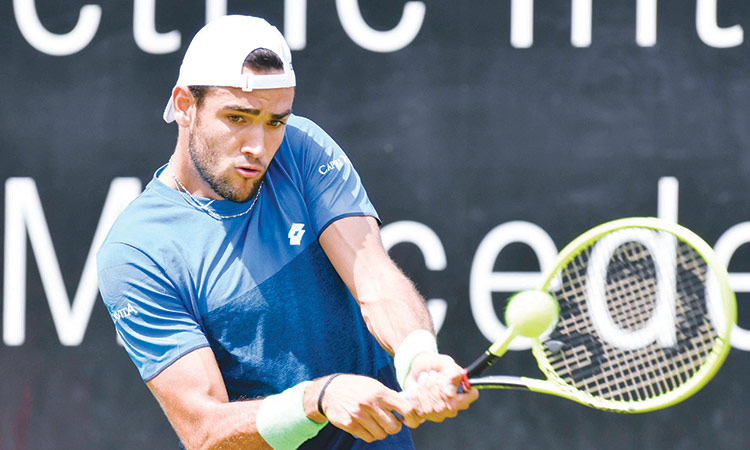 Matteo Berrettini returns the ball to Karen Khachanov (unssen) during their round-of-16 match of the ATP tournament in Stuttgart on Thursday. Agence France-Presse

France’s Lucas Pouille advanced to the last eight of the ATP tournament in Stuttgart on Wednesday, surprising third seed Daniil Medvedev with a hard-fought 7-6 (8/6), 4-6, 6-2 victory.

Pouille took control in the third set to battle past Medvedev and set up a quarter-final meeting with local favourite Jan-Lennard Struff who cruised to a 6-2, 6-2 win over Serbia’s Miomir Kecmanovic.

Raonic, 28, who missed the whole of the clay season with a knee problem, has now recorded two gruelling three-set wins in Stuttgart to reach the quarter-finals in his first ATP tour appearance since March.

The sixth seed and last year’s runner-up, who hit 24 aces, won four straight points from 0/30 at 5-5 in the deciding set and improved to a 5-2 record against Tsonga in their FedEx ATP Head2Head series. The Canadian won seven points from 0/1 in the final tie-break.

“I knew it was going to be tough, so I feel very lucky to have a chance to play another match,” said Raonic, who is returning to the ATP Tour after recovering from a right knee injury. “My serve helped me out a lot and the goal is to win as many games and matches as I can.”

Raonic will face Hungary’s Marton Fucsovics in the quarter-finals, after he sprang a surprise against Georgia’s Nikoloz Basilashvili earlier on Wednesday.

Fucsovics has now beaten Basilashvili in three of their four meetings this season.

Matteo Berrettini caused an upset when he beat Karen Khachanov, one week on from the Russian competing in the Roland Garros quarter-finals.

The 22-year-old Italian recorded his second top 10 win of the year over second seed Khachanov 6-4, 6-2 in 69 minutes. Last month at the Internazionali BNL d’Italia, Berrettini beat World No. 5 Alexander Zverev 7-5, 7-5 in the second round.

“I played a great match, served really well and did well with my slice,” said Berrettini. “Tomorrow will be a tough match against Denis Kudla, as he played well today against Gael. I will have to do my best.”

Berrettini, who is now 20-12 on the season, broke Khachanov at 3-3 with terrific anticipation at the net in the first set and then in the first game of the second set when the Russian struck a forehand long of the baseline. Berrettini took a 5-2 advantage with a low forehand volley winner, then closed out the match with a 60-second service hold – finishing with a backhand drop shot winner.

Khachanov, who reached his first Grand Slam championship quarter-final last week in Paris, broke into the top 10 of the ATP Rankings on Monday at a career-high No. 9. He is now 14-14 on the season.

“I’ve always been comfortable on grass, and to beat Gael on any surface is a big win,” said Kudla.

“Today was a really big test physically, mentally and I thought I passed it. I was up a break, but he doesn’t give you any rhythm. It’s very tough to stay focused and it came down to the wire.”

Defending champion Petra Kvitova meanwhile has withdrawn from next week’s Birmingham Classic because of an arm injury that ruled her out of the French Open, but is still hopeful of playing at Wimbledon.

Kvitova said on Twitter on Wednesday that “unfortunately Birmingham is too soon, but I’m working really hard to get back as soon as possible,” adding that she is “keeping everything crossed for @Wimbledon.”

The fifth-ranked Kvitova won the Birmingham tournament the last two years and is hoping to compete for a third Wimbledon title when the grass-court Grand Slam starts next month.

The Birmingham Classic will still feature the three highest-ranked women as No. 1 Naomi Osaka, French Open champion Ashleigh Barty - who has risen to No. 2 - and third-ranked Karolina Pliskova are set to compete.