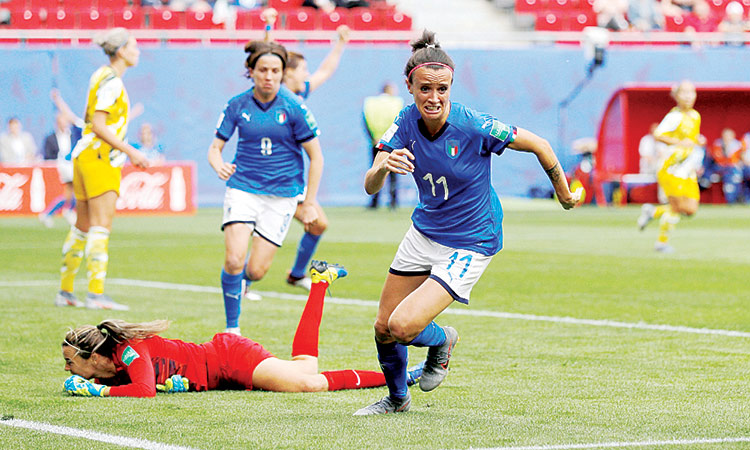 Barbara Bonansea’s stoppage-time winner gave Italy a 2-1 last-gasp victory over one of the tournament favourites Australia.

Turin: A brace against Australia and the praise of Italy legend Paolo Rossi, Juventus striker Barbara Bonansea ensured the Azzurre made a dramatic return to the Women’s World Cup after a 20-year absence.

Bonansea’s stoppage-time winner gave Italy a 2-1 last-gasp victory over one of the tournament favourites Australia, and they next face debutants Jamaica in their Group C game in Reims on Friday looking to book their ticket to the knock-out rounds.

“The Paolo Rossi of women’s football? Yes, I see myself a little in her,” insisted Italy’s 1982 World Cup hero Rossi of comparisons with Bonansea, who turns 28 on Thursday.

“She’s talented, fast, and she scored two goals.” Italy failed to qualify for the men’s World Cup in Russia last year, with Milena Bertolini’s side now carrying the nation’s hopes on the world stage.

The Italians have qualified for the women’s World Cup just three times, the last appearance in 1999 in the United States where they placed ninth, having reached the quarter-finals of the inaugural edition of China 1991.

In Valenciennes on Monday, Bonansea was the stand-out player with her speed and technical skills in what was an unexpected success against the much-fancied Australians.

She scored the winner in the fifth minute of additional time, after also having a third goal ruled out for being marginally offside.

She was carried triumphantly aloft by her teammates, all under the eyes of her parents, who drove the 1,000km from Pinerolo, near Turin, to the north of France in a camper van as her father was afraid to take the plane.

But even if many, also in Italy, are only discovering the talented forward, Bonansea’s success has not come overnight.

After an excellent Euro 2017, she had been contacted by French club Lyon, the best team in Europe.

The opportunity seemed impossible to refuse for an Italian, not having access to professionalism in her own country.

But at the same time, Juventus launched its women’s team and Bonansea, born 20km from the city, could not ignore the call of the black and white striped jersey.

Two seasons, 50 matches and 37 goals later, she has won two two Italian league titles with Juventus and one Italian Cup.

Above all, her success has mirrored the rise of women’s football in Italy, where the discipline, which still has a long way to catch up, started from very far.