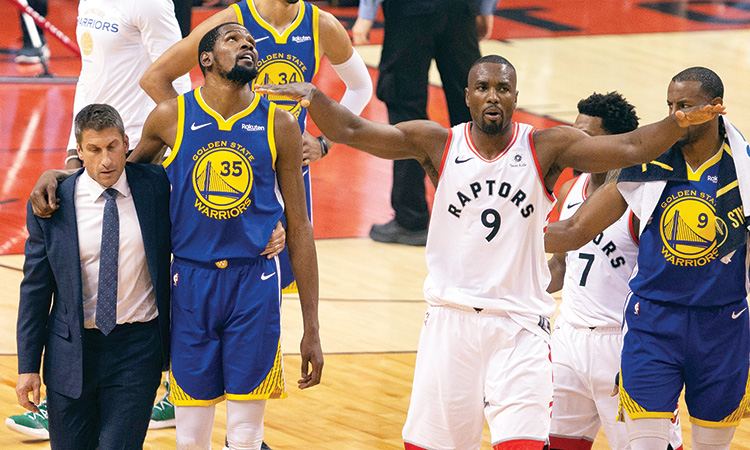 Golden State Warriors’ Kevin Durant (35) walks off the court after sustaining an injury as Toronto Raptors’ Serge Ibaka gestures to the crowd during Game 5 of their NBA Finals in Toronto on Monday. Associated Press

Oakland: Inspired by injured team-mate Kevin Durant and facing an emotional must-win game, the Golden State Warriors are counting upon resiliency and fighting spirit to stay alive in the NBA Finals.

Defending champion Golden State, seeking a third consecutive title and fourth in five seasons, entertains Toronto in game six on Thursday needing a victory to pull level at 3-3 and force a game seven Sunday at Toronto.

Durant, the 2017 and 2018 NBA Finals Most Valuable Player, sat out a month with a right calf injury before making a return in game five Monday only to go down with a right Achilles tendon injury, needing help to leave the court and crutches to exit the arena.

The 30-year-old superstar’s brief comeback effort, leading the Warriors in the playoffs with 34.2 points a game, has provided extra motivation for the teammates who saw him give everything he had in the championship quest.

“We’ll be suiting up in front of Oracle Arena and with the amazing atmosphere and opportunity to play for him, and to kind of honor the sacrifice he made in terms of putting his body on the line,” Curry said.

Golden State guard Klay Thompson will give his efforts in tribute to Durant.

Only once in 34 opportunities has a team that trailed 3-1 in the NBA Finals won the title, that coming in 2016 when LeBron James rallied Cleveland over the Warriors. Only three teams have even forced a seventh game.

Warriors forward Kevon Looney has a chest injury. Andre Iguodala has a calf injury. But everyone with nagging pain knows they can rest next week.

The Warriors will be playing their final game at Oracle Arena, their home venue since 1971. They leave the NBA’s oldest arena for a new $1 billion home in San Francisco next season and hope to exit Oakland as winners after two earlier finals home losses to the Raptors.

“The biggest advantage is being at Oracle Arena one more time, where our fans can really get behind us,” Curry said.

“We want to win this championship. We’re going to give everything we got, but I think we’re done with proving people wrong or making bold statements with our play. People know who we are.”