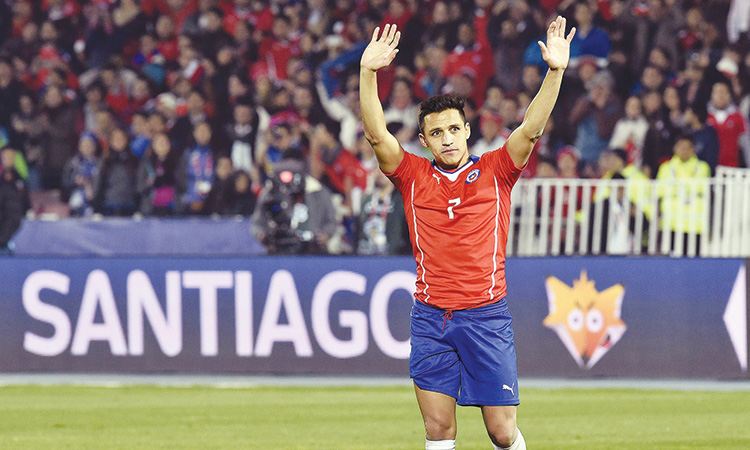 Chile’s hopes of retaining the trophy may rest on Alexis Sanchez rediscovering his form of old.

Rio de Janeiro: It’s been an annus horribilis and a half for Chile’s iconic leader Alexis Sanchez, who is known as the “Nino Maravilla” — wonder-kid — in his homeland.

Chile’s most capped player of all time and record goalscorer, Sanchez is so popular in the South American country that he even stars in a film about himself that was released in Chile last month.

Having helped Chile win the last two Copa America competitions -- including the one-off 100-year celebration Centenario in the United States in 2016 -- a statue of him has even been erected in his home town Tocopilla.

But it’s been an otherwise dreadful last 18 months for the Manchester United winger on the pitch.

And Sanchez will be desperate to prove he has much more to offer than his recent club form suggests.

Since moving from Arsenal in January 2018, the vibrant and pacey forward has been a shadow of his former self.

He scored 60 goals in 123 league games for the Gunners, almost one in every two matches, but that ratio has dropped to less than one in 10 at United, where he had just nine Premier League starts and one goal in the last campaign.

He also had to sit out the 2018 World Cup in Russia as Chile hadn’t qualified.

At 30, Sanchez is far from finished but at Old Trafford there have been signs that he’s lost his spark.

The wonder kid has at times saved his best for the national team and a strong showing at the Copa could boost his options in the transfer market should he leave United, as expected, during the off season.

Return moves to either Italy or Spain have been mooted despite the financial burden any team would face in trying to match his reported 500,000 pounds ($636,000) a week wages.

And the signing of young Welsh winger Daniel James in direct competition for Sanchez’s preferred position on the left suggests that United have made their feelings clear.

The Copa America will come as welcome respite for Sanchez, not least because if fit he will certainly start for Chile -- something that was increasingly not the case under Ole Gunnar Solskjaer at Old Trafford.

But his participation in Chile’s Group C opener against Japan next Monday is uncertain due to an ankle injury picked up at the end of the club season.

Sanchez was back working with the ball on Monday with his team-mates at their training base in Itu, near Sao Paulo.

“Without a doubt, Alexis is important for the national team,” said central midfielder Pablo Hernandez, describing the Manchester United forward as “a key piece” for the start of the tournament.

Team-mate Jose Pedro Fuenzalida said that Sanchez “raises the level of the team when he’s on form.”

Sanchez was key in Chile’s back-to-back Copa triumphs in 2015 and 2016: the first in the country’s history.

Chile’s hopes of retaining the trophy may rest on Sanchez re-discovering his form of old, which would also boost his chances of finding a way out of his United nightmare and starting afresh elsewhere.