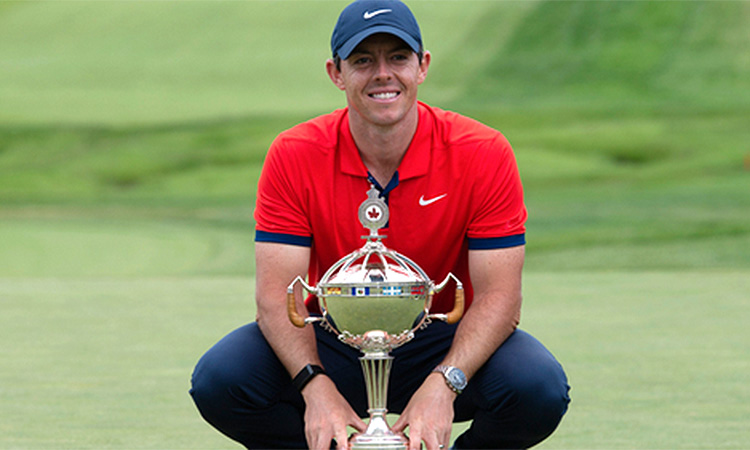 Rory McIlroy poses with the trophy after winning the Canadian Open golf championship in Ancaster on Sunday. Agence France-Presse

Rory McIlroy blitzed the field at the Canadian Open on Sunday, firing a scintillating nine-under 61 to run away with the title by a massive seven strokes less than a week before the US Open.

McIlroy, who flirted with a 59, put on a golf clinic, rolling in nine birdies, one eagle and two bogeys for a 22-under 258 total and a dominating victory over runner-ups Shane Lowry of Ireland and American Webb Simpson.

“It was awesome,” said McIlroy, who claimed his sixth career national open title in his Canadian debut. “I said at the start that I wanted to be aggressive and play with freedom.

“This will give me so much confidence. This is a huge tournament and I am so proud of myself.

“I am going to take a lot from this and I am so excited for next week (US Open).”

McIlroy, of Northern Ireland, began the day with a share of the lead with Simpson and Matt Kuchar at 13-under at the Hamilton Golf and Country Club in Hamilton, Ontario.

He was making his Canadian Open debut and improved with each round, shooting 67, 66, 64, before opening the birdie floodgates on Sunday.

The four-time major winner McIlroy was part of a strong field at the Canadian Open, which this year serves as the final tune up before the US Open.

The win was also his second of 2019 -- he captured The Players Championship in March.