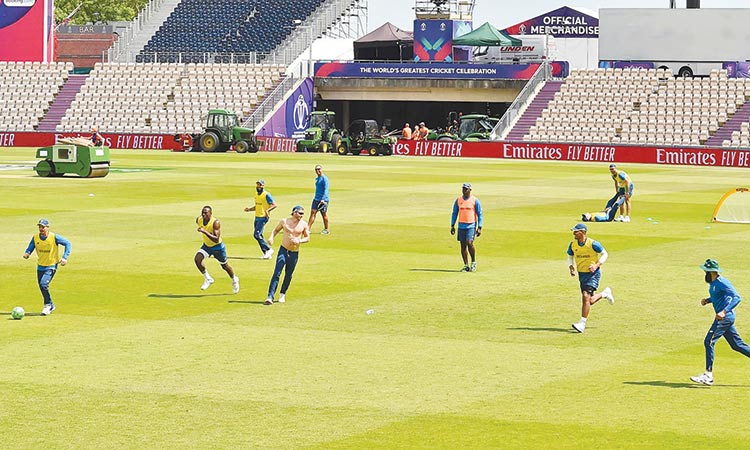 Southampton: After three consecutive defeats, South Africa will eye their first win of the ongoing World Cup 2019 when they face West Indies at the Hampshire Bowl, here on Monday. After a below par show so far, the Proteas desperately need a win to stay in contention for a spot in the semi-finals.

West Indies on the other hand looked slightly better after a win and a loss from their two games.

The Jason Holder-led Carribean side kicked-off their campaign on a convincing note with an impressive seven wicket win over Pakistan before suffering a narrow 15 loss to Australia.

The Proteas lost their all three encounters against England, Bangladesh and India.

The pacer’s performance in their six wicket loss to India must be heartening for skipper Faf du Plessis and the team management, but it’s the batsmen who need to step-up against a good looking West Indies pace attack.

So far, nothing seems to work well for South Africa as pacer Dale Steyn has been ruled out due to injury while Lungi Ngidi is also unfit for the game on Monday. South Africa have plenty to discuss about their inconsistent performance with the bat and their openers — Quinton de Kock and Hashim Amla will have to surely fire against the Windies. However, their middle order looks decent and the lower order has also chipped in with runs. The Proteas now needs to play fearless and attacking cricket.

The Windies will look to rise up from their narrow defeat to Australia, a game which was under their control. While their aggressive opening bowling in the first two matches have impressed everyone and if it happens again, it could be another threat for the Proteans as their openers have failed to fire. It was a poor shot selection by the Carribean batsmen in their run-chase against Australia, which cost them the match.  Meanwhile, South Africa coach Ottis Gibson admitted on Saturday he was frustrated to have to deal with the row over AB de Villiers’ controversial late offer to play in the World Cup.

It has emerged that De Villiers contacted Gibson and South Africa captain du Plessis to tell them he was willing to come out of retirement.

But it was agreed that De Villiers, who retired from international cricket last year, had left it too late to be called up because it would not have been fair to other players who had featured against Pakistan and Sri Lanka ahead of the World Cup.

De Villiers’ offer had remained under wraps until after South Africa’s World Cup campaign plunged into crisis with a third successive defeat against India on Wednesday. In the circumstances, Gibson was disappointed to have to deal with outside issues when he would rather be focusing on rescuing South Africa’s faltering World Cup challenge.

Asked how the situation with De Villiers developed at his pre-match press conference in Southampton on Saturday, Gibson revealed he had spoken to the 35-year-old and told him he should have made it clear he was available earlier in the year.

“AB called me. I think it was the morning that the squad was going to be announced. A lot of other things had gone on before that, of course,” he said.

“We had decided already that he left it too late because the door was left open up until December, and then after that to come this late in the day,” he added. “He knew, if he really wanted to, he knew that those 10 games against Pakistan and Sri Lanka were vitally important for us because from March to the World Cup we won’t have any more cricket. But again, he knew that, and he’s made his choice.”