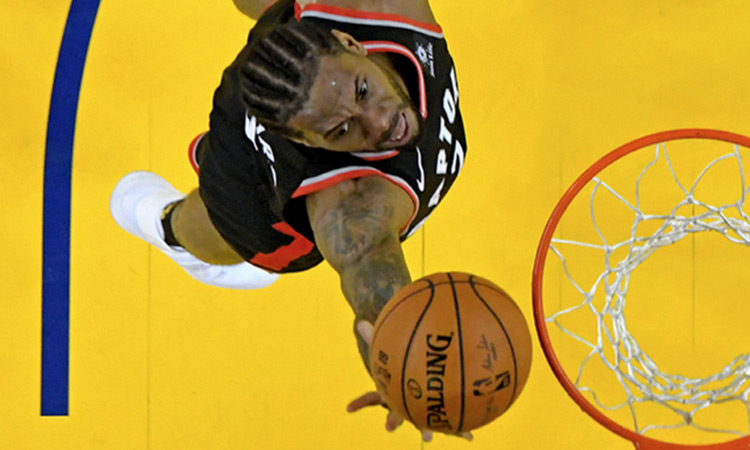 Upstarts Toronto moved halfway to a first-ever title on Wednesday with Kawhi Leonard scoring 30 points to lead the Raptors over the injury-hit Golden State Warriors 123-109 in the NBA Finals.

Kyle Lowry added 23 points and nine assists while Danny Green and Pascal Siakam each contributed 18 points as the Raptors seized a 2-1 lead in the best-of-seven series, which continues Friday in Oakland.

“It feels good,” Leonard said. “Just happy to get a game-three win and move us one step closer to our goal.”

Golden State fell behind by as many as 14 points in the first half and pulled no closer than seven in the second half despite staying within reach thanks to Curry’s one-man heroics.

“We answered a lot of runs, down to seven a bunch, and came back and scored a bucket or hit a three or whatever,” Nurse said. “Each time they chipped we answered back and that’s what you got to do if you’re going to keep your lead.”

The Warriors seek a third straight crown and their fourth in five seasons while the Raptors are in the first finals of their 24-season history.

Golden State decided just before tip-off to bench Thompson, a five-time NBA All-Star who averages 19.5 points. The team feared he could injure himself worse and miss more games, hoping a game’s rest -- even one that snapped his run of 120 career playoff games without a miss -- would ensure his health the rest of the way.

“The whole point was to not risk a bigger injury,” Kerr said.

“We live with that decision. He’s got another couple days to heal. Hopefully he’ll be out there Friday.”

The Warriors can’t afford to lose another player with Kevin Durant, averaging 34.2 points, uncertain for game four, and forward Kevon Looney out for the remainder of the finals with a chest injury.

Curry scored 25 first-half points, a career high for any finals half, but the Raptors led 60-52 at half-time, Toronto double-teaming the 3-point sharpshooter while his supporting cast struggled to equal his total.

The Raptors matched their biggest first-half lead at 66-52 early in the third quarter, but Curry had nine points and Andre Iguodala added eight in a 19-12 Warriors run to pull within 78-71.

Green answered with back-to-back 3-pointers and closed a 13-5 Raptors run with another to give the visitors their biggest lead of the first three quarters at 96-80.

But Lowry answered for Toronto by scoring nine points in a 15-5 run that gave the Raptors their largest lead to that point at 111-94 with 5:42 remaining and the Warriors’ final hopes faded.

“Toronto made big shots every time they need to,” Kerr said. “And we couldn’t get over the hump. We have to play better defense out there.” The Warriors, playing their first home game in 20 days, struggled from the start.

“They outplayed us,” Kerr said. “Now we just got to bounce back and get back in here Friday and hopefully get a little healthier and get some guys back, but we’ll see how that goes.” The Warriors scored 109 points for the third game in a row.