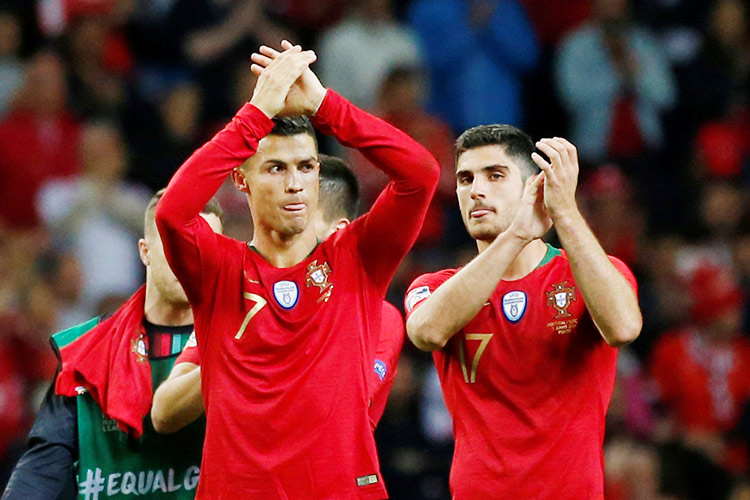 Portugal's Goncalo Guedes and Cristiano Ronaldo applaud their fans at the end of the match. Photo: Susana Vera/ Reuters

Portugal manager Fernando Santos hailed Cristiano Ronaldo a "football genius" after his 53rd career hat-trick sent Portugal into the final of the Nations League on home soil in Porto with a 3-1 win over Switzerland.

However, Ronaldo predictably took centre stage as he struck twice in the final two minutes to set up a clash with England or the Netherlands, who meet in the second semi-final on Thursday, in Sunday's final.

"I was his coach in 2003 and I could see where he'd go," said Santos. "He's a genius. There's genius paintings and sculptures and he's a football genius!"

However, the five-time Ballon d'Or winner returned to the national team in March and was always likely to be the centre of attention, particularly on a day when it was reported a rape lawsuit against him had been dropped.

A lawyer for the American woman who claimed she was sexually assaulted by Ronaldo -- accusations he has strongly denied -- later dismissed that report, saying the case had not been dropped.

The Portugal captain is however no longer his country's only star name, with Bernardo Silva starring for Manchester City where he could soon be joined by Joao Felix.

City are reportedly set to pay Felix's 120-million-euro ($135 million) buyout clause from Benfica, but the 19-year-old missed a glaring chance to mark his international debut with a goal just before the break as he blasted over from Ronaldo's pass.