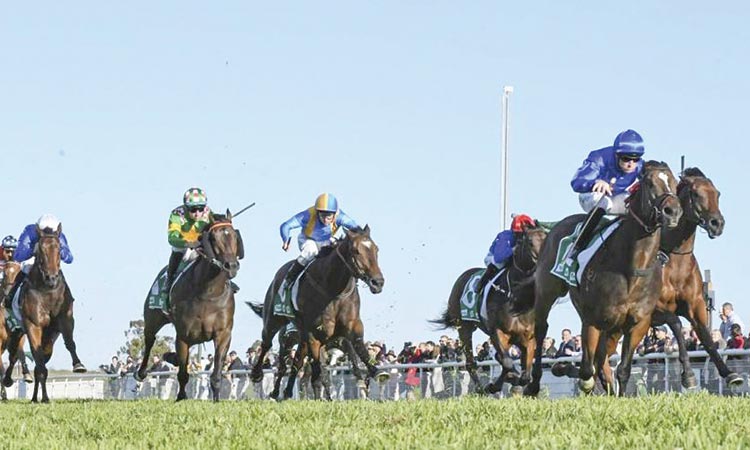 A sparkling piece of work by Trekking ahead of Saturday’s G1 Stradbroke Handicap has the colt in ideal order for an Eagle Farm feature in which he is one of four realistic Godolphin chances.

Trainer James Cummings will saddle the quartet that is completed by Encryption, Home Of The Brave, and Viridine and says he will have trouble placing any one of his runners one ahead of the others. Trekking (Kerrin McEvoy) comes to the penultimate G1 race of the Australian season off a close third in the Kingsford-Smith Cup over 1,300m at the same track two weeks ago and a strong gallop at Eagle Farm on Tuesday.

“I thought he let down beautifully in his gallop and we got just what we wanted out of it,” Cummings said.

“He was only just building his confidence on the going here at his last start, so I thought it was really important for Trekking this morning to work again on that different grass they have at Eagle Farm so he could get a feel for it.”

For Encryption (Craig Williams), the Stradbroke will be his final start before beginning a stud career for which his pedigree is a glowing recommendation - but a G1 victory would add greatly to his stallion credentials.

“He’s in good shape, he’s fit, he’s got that run in the Kingsford-Smith Cup under his belt and I think he’ll be a lot better horse this week,” Cummings said.

The trainer also believes the handicap conditions will suit Encryption, a son of Lonhro from the exceptional race mare Guelph.

“The biggest run of his life was under handicap conditions in the Oakleigh Plate earlier this autumn, so he looks well suited,” he said.

Home Of The Brave (James McDonald) had been primed for a big run in the Kingsford-Smith, but a spike in his temperature a day out from the race meant he missed the race.

“He got a little bit of a fever leading up to the Kingsford-Smith Cup, which is a shame because on reflection, that was his race,” Cummings said.

“But we’ve pushed on with him and I gave him a barrier trial last week to give him a competitive hit-out among other horses and avoid the risk of having him switch off too much.”

“He’s in a really good frame of mind and we’re pretty confident the 1,400m is his preferred distance.”

Viridine (Tim Clark) completes the Stradbroke team following a defeat at Doomben a week ago in a race Cummings believes could offer a strong guide to Saturday’s event.

“He only went down by a length to a pretty classy three-year-old filly in what might be the form race leading into the Stradbroke,” he said.

Classy filly Pohutukawa will challenge the colts in Saturday’s G2 Queensland Guineas at Eagle Farm with trainer James Cummings confident she can more than hold her own.

Pohutukawa (Blake Shinn) announced herself as a filly of great potential when winning the G3 Kembla Classic in March and has run well without success twice since.

But Cummings is anticipating a big improvement with the return to the 1,600m of the Kembla Grange race after racing at 2,000m and 1,400m at her past two.

“I think the 1,600m suits her perfectly and you couldn’t help but be impressed with that win in at Kembla Grange earlier in her prep,” he said.

Pohutukawa comes to the Guineas off a luckless eighth in the G3 Fred Best Classic at Eagle Farm two weeks ago.

“I can picture her turning around her defeat in the Fred Best Classic when she was blocked for a run and didn’t have the best of luck,” Cummings said.

“She’s a really classy three-year-old filly and I think this race is right up her alley.”

Cummings is also looking to his stable’s grand old campaigner Tally to ring up his 10th victory when he contests the G2 Brisbane Cup.

Tally (Tim Clark) has earned $1.2 million in a career that is a tribute to honesty and will need to produce his best to get into the frame here, but Cummings is satisfied that he can.

“He got caught up in the ruck last week in a tougher race, so we’re hoping that with a bit more luck he can get his chance,” he said.

The stable is also looking to Isaurian (James McDonald) to continue his winning form in the Listed Hinkler Handicap and for Plague Stone to do the same in the Listed Daybreak Lover Handicap.

“Isaurian has graduated from being a handy benchmark horse to being an open class Listed winner,” Cummings said.