Mirza back in action as Team Emirates head to Europe - GulfToday

Mirza back in action as Team Emirates head to Europe 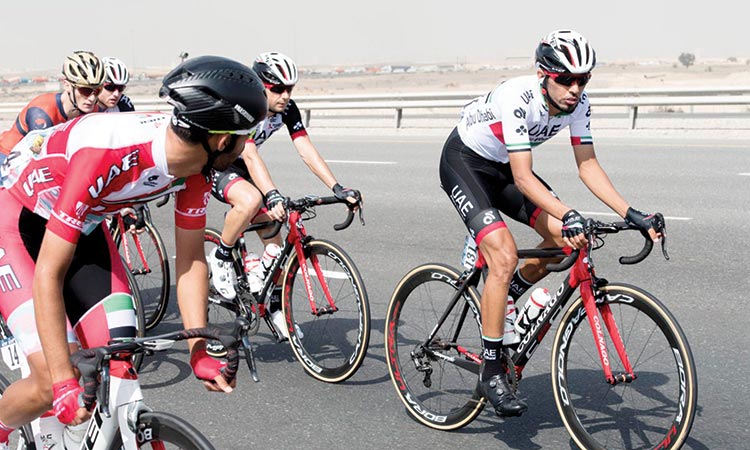 Team Emirates’ Yousif Mirza will lead a five-man outfit at the Hammer Series in Limburg.

Limburg: Just as the excitement from the first Grand Tour of the year subsides, the riders of UAE Team Emirates are back in action with their Emirati talisman at the helm.

The long weekend of racing begins on June 7 as Yousif Mirza heads up a five-man outfit for the second edition of the Hammer Series – this time in the Dutch city of Limburg. He will race alongside Roberto Ferrari, Mori Manuele, Rui Oliveira and Jasper Philipsen over three distinct stages – the Climb, the Sprint and the Chase (a team pursuit).

Ahead of the race, Mirza said: “It is nice to participate in an event like the Hammer Series, which gives value to the strength and unity of the team. The trial in Limburg is particularly demanding, we will try to take the right tactical approach to the sprint and climb events, and then try to defend ourselves in the pursuit team time trial.”

Mirza’s team will then be joined on June 10 by Simone Consonni and Aleksander Riabushenko for the one day Ronde Van Limburg race – a 201.1km loop that starts and finishes in the town of Tongeren. For both races the team will be guided by Sports Directors Aurelio Corral and Paolo Tiralongo.

Meanwhile a squad of six will be dispatched to Switzerland for the Gran Premio Citta di Lugano, a 179.2km race through the stunning scenery along the Swiss-Italian border. The team will be led by Fabio Aru as the ex-Italian champion returns for his first race post-surgery. Aru will be supported by the Italian duo of Diego Ulissi and Marco Macarto, the Slovenian duo of Tadej Pogacar and Jan Polanc as well as Aleksander Riabushenko. Rubens Bertogliati will be their Sports Director for the race.

Commenting on his return to racing, Aru said: “I’ve followed the prescribed rehabilitation program to recuperate physical strength after the surgery. I’ve had nothing but good sensations and I haven’t encountered any problems.

“In light of this and in agreement with the medical and technical staff, we have decided that it will be useful to participate in the GP Lugano to try out my racing rhythm. After that we will evaluate the situation to see what our next step should be.”

Meanwhile, Alexander Kristoff has triumphed on home soil after winning both the General Classification and the points jersey at the Tour of Norway 2019.

The Sprinter came over the line in third place on the final day after a 175.1km stage from Gran-Honefoss. However his result built on a series of impressive performances in which he came third three times, as well as taking a fourth place, a sixth place and first place finish.

The culmination of these races meant he was boosted into the overall lead with a three second gap over Kristoffer Halvorsen (Team Ineos) and five seconds over Edvald Boasson Hagen (Dimension Data), both Norwegian rivals.