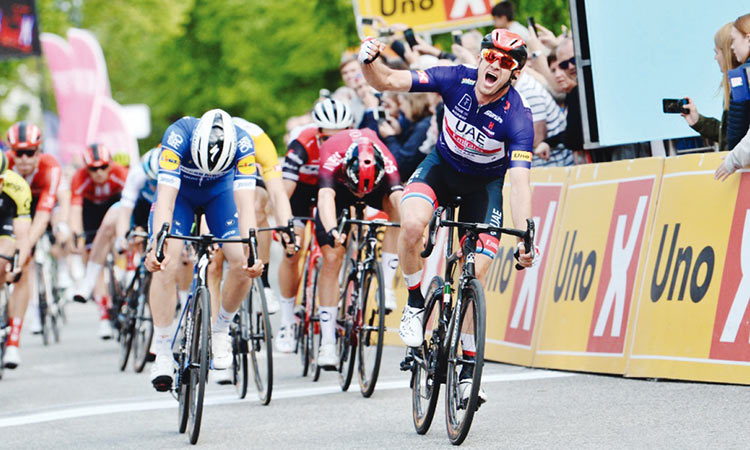 Alexander Kristoff has triumphed on home soil after winning both the General Classification and the points jersey at the Tour of Norway 2019. The sprinter came over the line in third place on the final day after a 175.1km stage from Gran-Honefoss. However his result built on a series of impressive performances in which he came third three times, as well as taking a fourth place, a sixth place and first place finish.

The culmination of these races meant he was boosted into the overall lead with a three second gap over Kristoffer Halvorsen (Team Ineos) and five seconds over Edvald Boasson Hagen (Dimension Data), both Norwegian rivals.

After UAE Team Emirates shut down a six-man break, Kristoff relied on his seasoned, 37-year-old domestique to close a growing gap atop the race’s final climb — a 4.3km category climb peaking 11.5km from the finish of a challenging 174.5km ultimate stage from Gran.

It looked grim for race leader Kristoff at the tail end of the sixth and final stage. The previous stage winner, who lifted the yellow jersey off rival Hagen (Team Dimension Data) on Saturday, had to rally in the closing kilometres to finish third and hold off fellow Norwegian and stage six winner Halvorsen (Team Ineos) for the overall victory at the Tour of Norway.

“We started with the responsibility and goal of defending the leadership in the overall standings: the team was totally focused on controlling the race, and then working very well to support me and to stay in the main group,” said Kristoff.

“Though I thought I could win the final sprint, two guys came past me, but third place was enough to allow me to win the Tour of Norway.

“I am very happy, it has been a long time since I won the overall classification of a race “

The 23-year-old Halvorsen started the day in fourth place two seconds adrift of Kristoff, but the win moved him up and over Boasson Hagen and Stage 4 winner Edoardo Affini (Mitchelton-Scott) to close the final general classification just behind the 2017 European champion.

“It was a really amazing feeling, we have been trying all week to get a stage win and today we did it on the last stage,” said the best young rider and race runner-up.

“The team did a really good job in the final 10 kilometres, I was in the perfect position with 150m to go and I just had to sprint flat out to get the win — it’s a really nice feeling.”

Meanwhile, after racing professionally for nearly two decades, including the last seven on the World Tour, Rory Sutherland has ridden around the circuit more than once. The 37-year-old the Australian capital of Canberra has served in a supportive role for three of the sport’s top general classification riders, including Spaniard Alberto Contador at Tinkoff-Saxo from 2013 to 2014, Colombian Nairo Quintana at Movistar from 2015 to 2017, and most currently Irishman Dan Martin since joining UAE-Team Emirates last year.

But according to Sutherland, his Norwegian team-mate Kristoff may just be the toughest of the bunch.

“It’s like you and I spoke yesterday about working for leaders and trying to figure out what they want,” Sutherland told Eurosport following Kristoff’s overall victory at the Tour of Norway on Sunday.

Holding only a one-second advantage on GC over rival countryman Hagen (Team Dimension Data), and two over stage four winner Affini (Mitchelton-Scott), Kristoff’s grip on the yellow jersey appeared to be slipping over the final climb of the race 15 kilometres from the finish.

“My job is to stay with Alex and as soon as we get over the crest of the hill, I have to go as hard as I can to get him back to the group and we managed to get back in,” explained Sutherland, referring to his role to help the Milan-San Remo, Tour of Flanders and most recent Gent-Wevelgem winner close a growing gap at the summit of the 4.3km category one climb near H0nefoss. “We were actually with the front group over the top of the second part of the climb.

“We were way over the red line,” he continued.