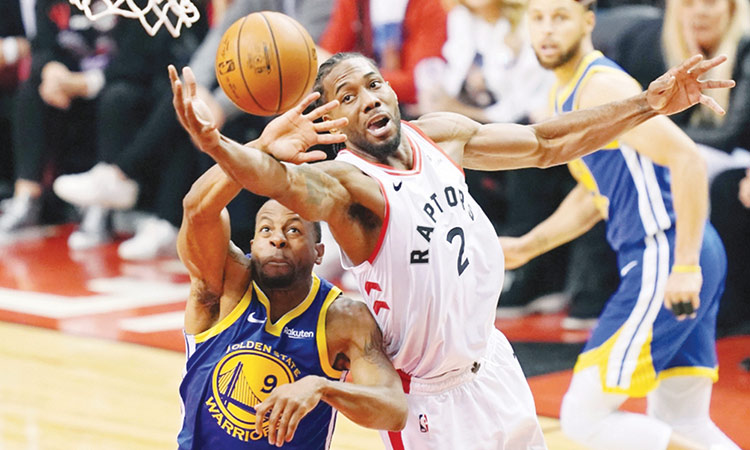 You couldn’t tell from looking at his stone-faced manner or listening to his monotone remarks, but Toronto Raptors star Kawhi Leonard is having fun in the NBA Finals.

And his poise under pressure and composure in tense moments has set the tone in lifting the Canadian club into contenders for their first NBA crown against defending champions Golden State.

“Until we win the game or it’s all done, then I’ll show some emotion,” Leonard said.

“But I want to stay even-keeled while I’m going through it.”

Leonard gives few clues to what’s in his heart and on his mind, shunning social media and guarding the details of his personal life, cutting off avenues that have turned other talented NBA playmakers into more famous and acclaimed household names.

“I’m not playing the game for that reason,” Leonard said.

“I’m playing to have fun and be the best player I can. I’m happy with myself and what I’ve done in my career and I’m just going to keep on from there.

“It’s not about me being famous or want to have more fame than those guys. It’s about me playing basketball and having fun on the floor.”

Leonard, who turns 28 later this month, sparked the San Antonio Spurs to the 2014 NBA crown, earning the NBA Finals Most Valuable Player award. He was named NBA Defensive Player of the Year in 2015 and 2016, establishing himself as an elite shutdown defender with few rivals.

“If you were teaching your kid, this is how you play sports, you would tell him, don’t get too high, don’t get too low, compete to win, care about winning, don’t let your emotions get the best of you -- all those things that he is,” Nurse said.

“He’s just steady, he’s always thinking about the play and how does it affect how we can win. It’s an unbelievable mindset. Very strong.”

“A lot of guys have become more even-keeled and more calm and not worried. They’re cool and collected and making winning plays because of how Kawhi does it.

“That persona, those mannerisms, that leadership, it trickles down to everybody. It definitely has that effect.”

Leonard was only 16 when his father, Mark Leonard, was shot and killed in 2008 in southern California, where Kawhi became a high school and college star.

Leonard said he picked up his mellow demeanor learning from such stars as Tim Duncan, Tony Parker and Manu Ginobili in San Antonio.

“Probably just growing up playing basketball. Just being in those experiences,” he said.

“Always wanting to win. Learning from the great teammates that I had, seeing how they approached every game.

“Win, lose or draw, I’m still going to be living, still got a family. This is all for fun. I can’t complain about my career. I had a great time each step of the way. I had fun with my whole journey.”

Last season was a low point after a right quad injury with the Spurs and reported issues between team and personal doctors over Leonard’s status, issues that pushed his trade to Toronto last July.

Leonard also signed a sponsor deal with New Balance in 2018 after a split with Nike, whom he reportedly sued Monday for copywrighting his “Klaw” logo without permission.

Teammates give little more insight than Leonard himself, saying Leonard is just like anybody else.

“Me and him have developed a relationship off the floor. He’s a great guy,” Raptors guard Kyle Lowry said. “He’s just a regular guy like everybody else. Just a regular cool dude. He’s a fun guy.” Cameroonian forward Pascal Siakam agreed Leonard is just one of the guys.

“He comes in, gets his work done and then off the court he’s just like everyone else. Like literally it’s normal,” Siakam said.

“He comes in, gets his work done and then off the court he’s just like everyone else. Like literally it’s normal,” Siakam said.

“He does his work and he comes with us, hangs out and does all the things that we do.”