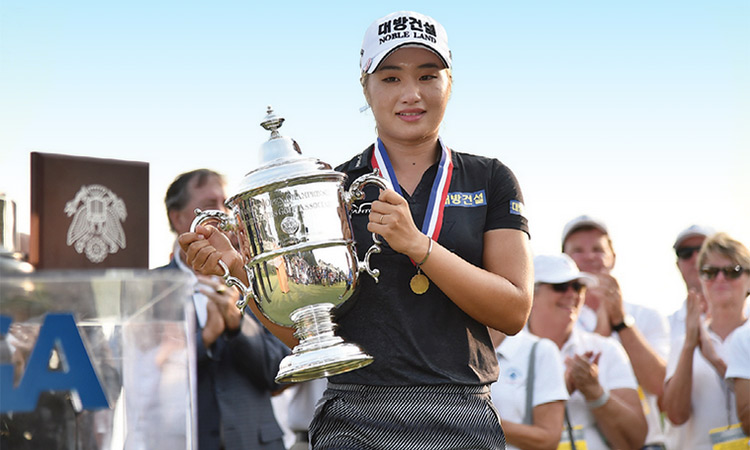 Jeongeun Lee6 holds the trophy after winning the US Women’s Open at Country Club of Charleston on Sunday. Reuters

Patrick Cantlay powered to an eight-under par 64 on Sunday to claim his second US PGA Tour title at the Memorial by two strokes from Australian Adam Scott.

Cantlay, 27, went into the final round four strokes behind overnight leader Martin Kaymer whose bid to end a near five-year victory drought faded with a final round 72 that left him in third place.

Cantlay’s bogey-free effort was the best final round by a winner in the history of the Jack Nicklaus-hosted tournament at Muirfield Village in Dublin, Ohio. The former US collegiate star, whose career was nearly derailed by a back injury, was coming off a tie for third at the PGA Championship, one of seven top-10 finishes this season.

He indicated on Saturday that 18-time major champion Nicklaus had given him some advice on how to close out tournaments.

Scott, like Kaymer a former world number one seeking to end an extended winless run, continued his recent resurgence with a final round 68 that left him on 17-under 271.

It was his second runner-up finish of the year after his second place at Torrey Pines, to go with top-10 finishes at Riviera and the PGA Championship.

Tiger Woods, who admitted Saturday that he was too far back for a serious run at a sixth Memorial title, was looking for a springboard into the US Open at Pebble Beach, and he got it with a sparkling five-under par 67. Woods was charging with seven birdies in his first 12 holes, backing up just a bit with bogeys at 14 and 18.

Meanwhile, Lee6 Jeong-eun captured her first major championship and a record $1 million prize on Sunday by outduelling Celine Boutier for a two-shot victory at the 2019 US Women’s Open.

South Korea’s Lee -- who had never won on the LPGA Tour -- stumbled to the finish with two bogeys in her final three holes but managed to shoot a one-under 70 to finish at 278 at the Country Club of Charleston in South Carolina.

“Throughout the year I couldn’t imagine coming this far, winning the first LPGA tournament, also a major championship,” she said. “I worked so hard and I feel proud of myself.”

It was six-under winning total for the player who became known as Lee6 Jeong-eun when she became the sixth player of that name on the Korean LPGA tour.

She also collected the biggest single-tournament payout in women’s golf history after organizers decided to increase the first place prize money this year to $1 million.