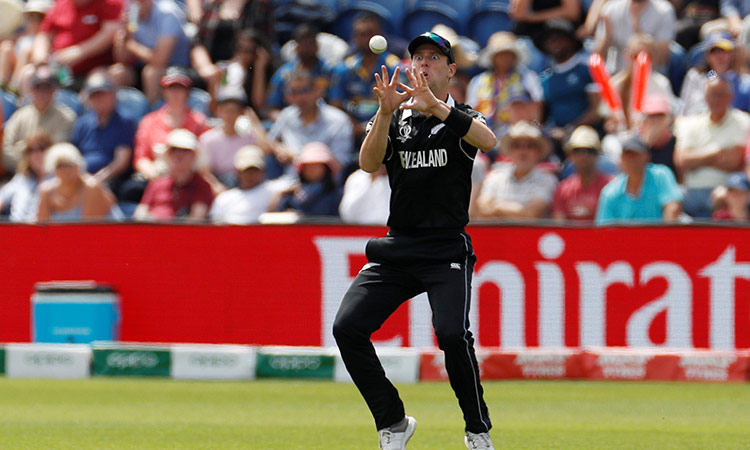 New Zealand’s Matt Henry got the man of the match award against Sri Lanka for his his three-wicket haul. Reuters

Sharjah: Pacers have already set the tone for an exciting contest between the bat and the ball at the World Cup.

Otherwise, in the modern day, cricket, where bowlers are reduced to mere cannon fodder and batsmen, prima donnas of the game, strive to satisfy the insatiable appetite of the fans for boundaries and sixes, has become somewhat a very uneven contest.

It is sheer delight to watch, when a fast bowler pitches the ball just outside the off stumps and even the best batsmen are taken by surprise as the ball goes past, missing the outside edge by a whisker and landing in the safe hands of the wicket-keeper.

Such deliveries instil a fear in batsmen and the confidence of bowlers, who are always at the receiving end, gets a lot of boost.

Contrary to common belief that the conditions would be conducive for swing bowlers at the World Cup in England, it is the pacers who are sprinting away with the limelight.

As the tournament transpires, it has become evident that the team with the best pace attack is likely to run away with the trophy.

After two days and four matches, eight out of ten participating teams have already got their campaign off the mark.

In the four matches played so far, pacers have accounted for a total of 49 wickets out of 54 wickets fallen altogether, which is equivalent to almost 90 per cent of the overall dismissals.

These kinds of stats are really an encouraging sign for the art of fast bowling, which has been dwindling due to the growing popularity of the shorter versions of the game.

In the shorter versions, both turf and rules are tailor–made to suit the batsmen, who are considered as crowdpullers.

Of the ten participating teams, five come from the sub-continent, where the pitches are spin friendly. All the aspiring cricketers grow up playing on those turfs and very few dare to dream of becoming a quickie.

In the five participating nations from the sub-continent, not a single genuine fast bowler is playing at the World Cup who can hit the deck with 150km/hr speeds consistently.

Even the country like Pakistan, renowned for producing lethal pacers like Sarfraz Nawaz, Imran Khan, Wasim Akram, Waqar Younis and Shoaib Akhtar, has been facing the dearth of genuine fast bowlers. Their bowling spearheads in the last one decade have been spinners like Saeed Ajmal, Zulfiqar Babar and Yasir Shah.

So the responsibility of preserving the art of the fast bowling and passing it on to the next generation rests with the remaining five countries until the sub-continent cricket boards wake up from their slumber and start making sporting pitches rather than spin or batting friendly.