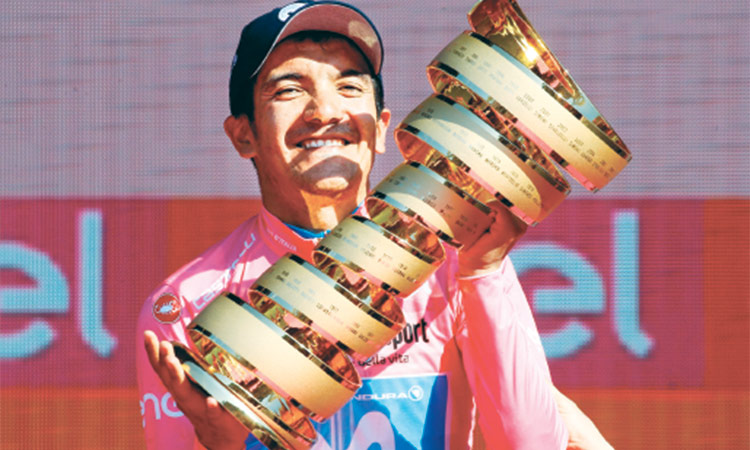 Richard Carapaz became the pride of Ecuador on Sunday after becoming the country’s first cyclist to win the Giro d’Italia, in a journey that has taken him from riding a bicycle without tyres in his native Andes to seeing off all-comers in the Alps and Dolomites of northern Italy.

The against-the-odds triumph capped the 26-year-old’s incredible rise from a humble background, riding a ‘skeleton’ bicycle his father found in a junk yard, to the highest level of the sport.

“We keep it as a family relic,” Carapaz’s 27-year-old sister Cristina said, as she proudly showed off the rusty old blue BMX which sparked the dream.

Carapaz, now known as ‘The Locomotive’, used the makeshift bike to climb the dusty roads around the family’s modest house in the village of Playa Alta, high in the mountains of northern Ecuador, near the border with Colombia.

Selling milk represented the main source of income for the family, and young Richie worked in the fields.

“When I was a teenager. My mother had cancer and for some time I looked after the (three) cows,” he said.

Their father Antonio arrived home one day when with the small BMX which had no seat, no brakes or pedals. The bicycle is now kept as a prized possession.

The walls of their home are also covered with medals, photos, and memorabilia, including the white jersey for the best young rider Carapaz won at the 2018 Giro d’Italia, with a dedication: “With a lot of love to my parents Ana and Antonio”.

There is also the jersey in which he won the Vuelta a Asturias in 2018. If he had his first bike aged eight, Carapaz only began competition much later.

At 20 he was the best young rider at the Tour of Guatemala, the same year he won the U23 title at the PanAmerican Games.

Carapaz raced on local teams in Ecuador before his talent captured the attention of talent scouts.

Still in the U23 ranks, Carapaz linked up with a Colombian team, and became the first non-Colombian to win the Vuelta de la Juventud de Colombia.

“He is a great climber, he has a great power in the high mountains, he is a racer who defends well in the time trial,” Cely, who coached him at the Strongman-Campagnolo team, told AFP.