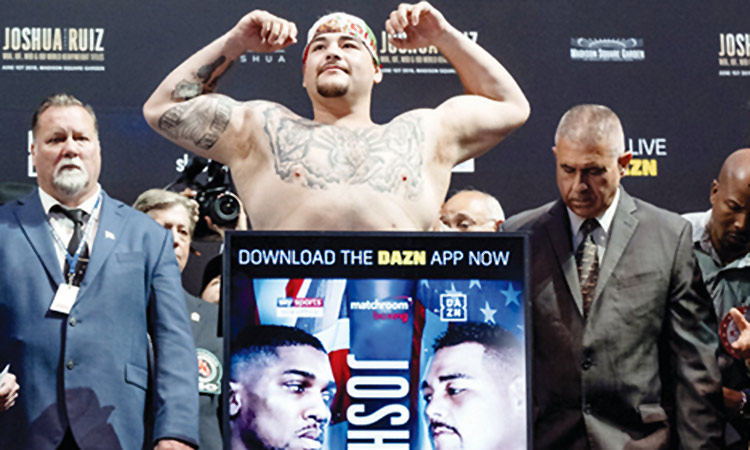 Heavyweight boxer Andy Ruiz Jr. weighs in at Madison Square Garden, on Friday, ahead of a title bout on Saturday against Anthony Joshua in New York. Associated Press

Andy Ruiz Jr. hopes to use his extra weight as a weapon against heavyweight champion Anthony Joshua when the pair meet on Saturday at Madison Square Garden.

Joshua will defend his IBF, WBA and WBO titles against Ruiz, who is looking to become the first Mexican heavyweight champion.

While the 1.98m tall Briton came in at 247 1/2 pounds for his debut fight in the United States, Ruiz tipped the scales at 268 pounds during Friday’s weigh in.

The 29-year-old hopes the pounds will help him overcome his height and reach disadvantage.

“That was the game plan,” Ruiz told reporters. “We’re fighting someone big, someone taller than me. So I want to carry that weight well so my punches are going to hit harder.”

Joshua brings an undefeated record of 22 wins, including 21 knockouts, to the ring against Ruiz (32-1, 21 KOs). He had been scheduled to fight Jarrell Miller but the New York State Athletic Commission refused to sanction the fight after Miller failed a drugs test.

“Tomorrow night, I put the titles in the air and they’re up for grabs,” Joshua said. “And me and him go to war. So the best man wins.”

“Well, as I always say I’m the realest champion in the business and as I’ve mentioned before I must handle all my controversial fights ASAP. Luis Ortiz is first, then Tyson Fury,” Wilder said on Twitter, announcing a fight that fans have itched for since he and Fury battled to a bruising split decision draw in December in Los Angeles.

Fury was leading on the scorecards before he was knocked down by Wilder in the 12th round. The big Briton beat the count, but his second knockdown of the bout helped cost him a victory.

Chances of a rematch seemed slim after Fury signed with promoters Top Rank for his fights to be televised in America on ESPN. Wilder fights for Premier boxing Champions which deals with broadcasters Showtime and Fox.

Further details -- such as date, venue and telecaster -- for Wilder-Fury II have yet to be confirmed, although multiple US outlets reported it would be scheduled in the first quarter of 2020.

In the meantime, Wilder said he would focus on Ortiz. Wilder won his first encounter with the Cuban with a 10th-round stoppage, but not before the 40-year-old had badly shaken the undefeated champion.

“By no means I’m looking past Ortiz, He’s a dangerous fighter but I am looking through him,” tweeted Wilder, who is unbeaten in 41 fights with 40 knockouts and draw — against Fury.

Fury, 27-0 with 1 draw and 19 knockouts, is scheduled to return to the ring against German Tom Schwarz on June 15, fighting for the first time in Las Vegas, Nevada.