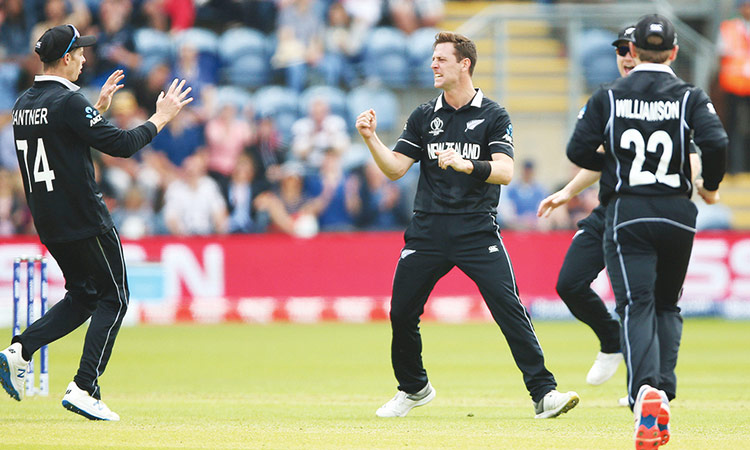 New Zealand made a flying start to their World Cup campaign as paceman Matt Henry struck three times in a 10-wicket trashing of woeful Sri Lanka on Saturday.

Henry returned figures of 3-29 and combined with fellow paceman Lockie Ferguson, who also took three wickets, to bowl out Sri Lanka for just 136 in 29.2 overs in Cardiff.

Martin Guptill and Colin Munro then hit unbeaten half-centuries to make short work of their modest target. The Kiwis cruised home in 16.1 overs to register their third win in a World Cup game by 10 wickets.

The right-left batting combination of Guptill, who hit 73, and Munro, who scored 58, had little trouble in smashing the Sri Lankan bowlers to all parts of the ground.

Guptill hammered eight fours and two sixes including one hit that sailed out of the ground. But it was Henry’s spell of seven straight overs that opened the gates for New Zealand’s domination against the 1996 champions.

“It’s a great start for us. You want a balanced attack going into any surface. It is important that you have that to have aggressive options for different occasions,” New Zealand captain Kane Williamson said.

“The two at the top played beautifully. It was nice for those guys to play a few shots. It was a good all-round performance.”

Sri Lanka skipper Dimuth Karunaratne added: “It was a good toss to win. In the morning it was seaming and swinging. They had that advantage and they have good bowlers to do that, so they took their chance.

“The batters aren’t low on confidence. We batted well in some practice games and we work really hard. We need to think about the game.”

Henry stood out in the absence of senior paceman Tim Southee, who missed the game due to a calf injury, with his incisive pace and swing.

He struck with the second delivery of the game to send Lahiru Thirimanne trudging back to the pavilion after the left-handed opener had hit a boundary from the first ball.

Thirimanne was initially ruled not out by the on-field umpire, but the Kiwis successfully reviewed the lbw call in their favour after replays suggested the ball pitched on line and would have hit the batsman’s leg stump.

The left-handed Karunaratne, who has returned to the one-day side after a gap of four years, then put on 42 runs for the second wicket with Kusal Perera.

But Williamson kept Henry on for the bowler’s fifth over and the decision paid off as he got Perera for 29 and Kusal Mendis without scoring on successive deliveries.

Dhananjaya de Silva played the hat-trick ball with a glorious off drive, but soon fell to the pace of Lockie Ferguson after being trapped lbw.

Karunaratne fought on to register his third ODI fifty in 81 balls before he ran out of partners after Lasith Malinga was bowled by Ferguson for one.

Karunaratne’s unbeaten 52 made him only the second opener in World Cup history to carry his bat through a completed innings.

The feat had previously been achieved by the West Indies’ Ridley Jacobs, who made an unbeaten 49 against Australia in 1999.

New Zealand, runners-up in the 2015 edition, will next face Bangladesh on June 5, while Sri Lanka meet Afghanistan on June 4.