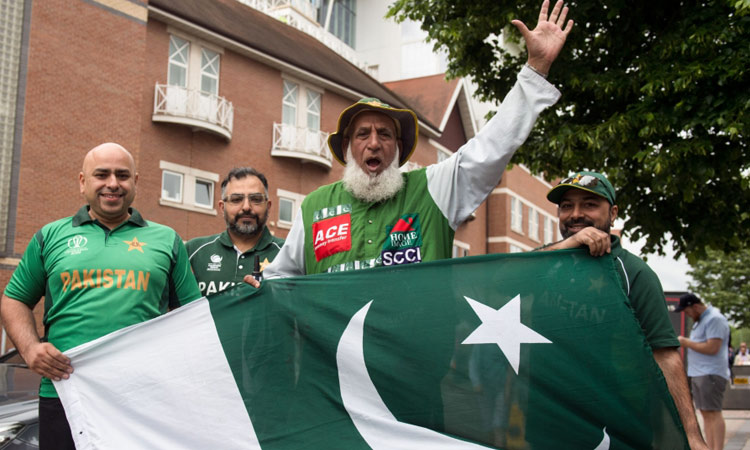 'Chacha Cricket' (C) poses for a picture ahead of the group stage match between West Indies and Pakistan at Trent Bridge. AFP

"I am a fan for 50 years today," Jalil told AFP as he entered Trent Bridge stadium to support Pakistan.

The match itself was a damp squib for Pakistan's large number of fans as their team were dismissed for a paltry 105 before West Indies romped to victory by seven wickets in just 13.4 overs.

Jalil's spirits were not dampened by a clatter of early wickets.

"I am here to support Pakistan and Inshallah (God willing), Pakistan will win this World Cup, just like we won the Champions Trophy here in England," said Jalil.

Chacha Cricket (or Uncle Cricket) wears the traditional green shalwar kameez, Pakistan's national dress, and can be found at every Pakistan match.

He first attended an international game at the age of 19.

"I remember it was a Pakistan-England match and the year was 1969. Colin Cowdrey was the English captain, and Saeed Ahmed led Pakistan in Lahore Stadium.

"I paid five Pakistani rupees for the tickets and went with four friends. I enjoyed it very much."

He later got a job in the United Arab Emirates and was a famous fixture at the Sharjah ground for many years.

Jalil will receive a prize at the Global Sports Fan Awards on June 14 in Manchester, two days before the much-anticipated India v Pakistan game at Old Trafford.

"I am honoured to know that I will get an award on completing half a century of cricket watching," he said.