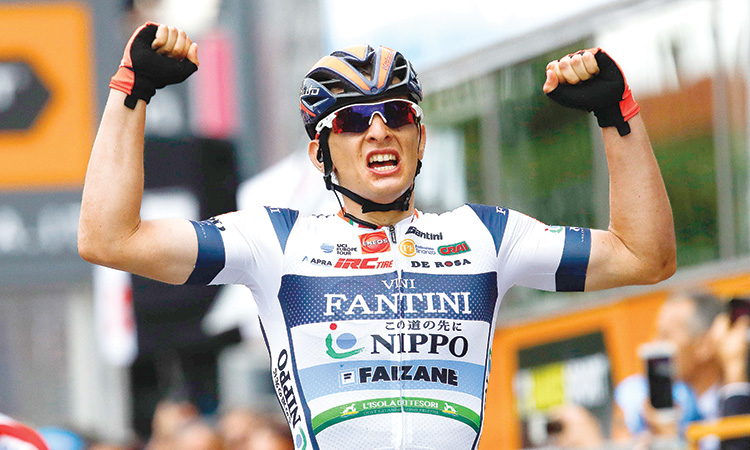 Santa Maria di Sala: Italy’s Damiano Cima of the Nippo team snatched victory with a sprint finish, holding off a late charge in Thursday’s 18th stage of the Giro d’Italia as Ecuador’s Richard Carapaz tightened his grip on the leader’s pink jersey with three days left.

Cima had been part of a long range breakaway and edged Germany’s Pascal Ackermann, who headed up the charging peloton, on the line after nearly five hours in the saddle, with Italy’s Simone Consonni, third for UAE-Emirates.

A clearly frustrated Ackermann could later console himself after regaining the sprint points jersey at the expense of France’s Arnaud Demare, the big loser of the day, while Cima was left in a state of euphoria.

“I can’t believe what just happened. I’ve spent so many kilometres in breakaways during this Giro. I thought I’d never make it, but I’ve won today,” said the rider from Brescia, whose only previous win was a stage in the Tour of China last year.

“It’s insane, the dream of a lifetime.”

There was no change among the top three with Movistar’s Carapaz holding his 1min 54sec advantage over Italy’s former two-time winner Vincenzo Nibali, with Slovenian Primoz Roglic third at 2min 16sec.

“The important thing is that I finished again with good feelings and without any damage or mishap for anyone on the team,” said Carapaz.

“Tomorrow is different: it is another contact with the mountains, another test for us, the three days will be equally crucial.

“We feel very prepared in the team and, above all, with the confidence that we can do things well,” he warned.

It was an eventful stage which got underway in Valdaora in the Dolomites.

Cima formed a three-man breakaway after 50km along with Mirco Maestri and Nico Denz, building up a maximum advantage of four and a half minutes on the pink jersey group.

The 222km stage gave the remaining sprinters a final chance as the route dropped to sea level, through the Venetian hinterlands to Santa Maria di Sala, concluding with a 2km sprint for the line.

Demare lost out in the final sprint having led Ackermann in the intermediary sprint.

The Groupama-FDJ rider finished eighth losing all hope of reclaiming the points jersey from Bora-Hansgrohe’s Ackermann.