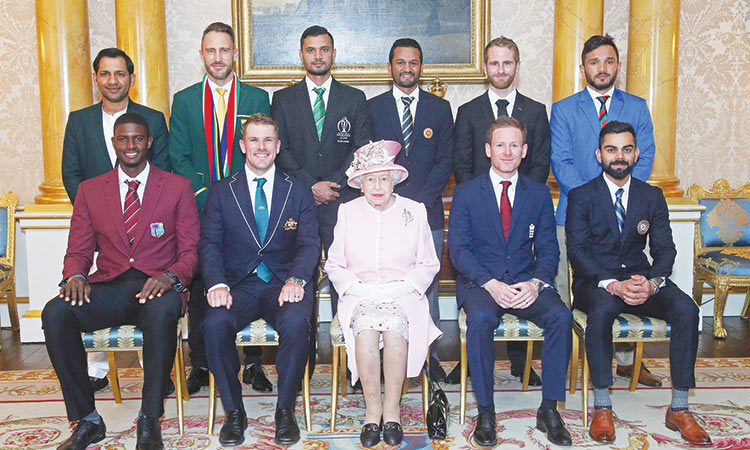 Britain’s Queen Elizabeth II poses with the captains of the teams participating in the ICC Cricket World Cup at the Buckingham Palace in London on Wednesday. Agence France-Presse

Shai Hope has insisted that while West Indies are not aiming to score 500 runs in the upcoming World Cup, it would be great if his team becomes the first to cross that mark.

“It is definitely a goal we can try to achieve at some point,” the ICC website quoted Hope as saying after Tuesday’s warm-up game against New Zealand. “Definitely, it would be great to be the first team to cross that 500 mark, and I am sure we have the batting firepower to do it.”

Windies were absolutely ruthless in their batting approach as they posted a monstrous 422 run target for the Black Caps and then defended it easily, securing a 91-run victory.

With the likes of Shimron Hetmyer, Nicholas Pooran, Evin Lewis and Carlos Brathwaite in the line-up apart from the aforementioned trio of Gayle, Russell and Hope, West Indies have the fire-power to dismantle attacks. Carlos Brathwaite also agreed with Hope, although he acknowledged that West Indies had the benefit of a longer batting line-up for the New Zealand warm-up match than they would in an 11-a-side match.

“If you are asking me if we are capable of it, definitely we are,” Brathwaite said. “However, in a real game you probably won’t have the depth in batting at 10 and 11 that we had today. So you need to be a little real about the target.

The Windies, who haven’t played a World Cup final since 1983 having won the first two editions (1975, 1979), are tipped as one of the ‘dark horses’ going into this summer’s edition of cricket’s biggest prize.

Brathwaite, best known for hitting four successive sixes to finish off England in the last over of the 2016 World T20 final, will be expected to get those much needed runs in the death overs, and break a partnership or two with the ball as the men from the Caribbean tread their path in the marathon league stage where each team takes on the other.

“I have contributed to wins in the past which haven’t made as big headlines as the World T20 final contribution,” Brathwaite said.

More telling was his performance in the first warm-up match against tournament favourites Australia in which Brathwaite struck 60 off 64 balls to steady the ship and guide Windies to 229 after they were reeling at 104/6 at one point.

“After losing my place in the Test team, it was due to my form with the bat in the past couple of years that I have been cool and calm about it. I would be not hitting four sixes again maybe but I am happy to be the one who comes in and takes crucial wickets or scores important 20 or 25,” said Brathwaite.

“Not necessarily score a fifty or take a hat-trick to feel that I have contributed. So that mindset has helped in the last couple of years,” he added.

A team brimming with potential, Brathwaite said West Indies know what they are capable of but have to execute plans properly in order to reap dividends at the showpiece event.

“We know from the players that we have the belief that we can win and we will play our best cricket. We have to play our best game over nine preliminary games then in the semi-finals and finals. We are keeping our hopes up, we are very positive. We know what we can do but we need to execute (plans) and as long as we can execute (our plans) we have full faith that we can lift the trophy. “The brand of cricket we played in the Caribbean, if we can replicate that in England, then we will get somewhere closer to challenging for the title. We have been traditionally a good tournament team so hopefully we can win the third World Cup,” Brathwaite said.

West Indies take on Pakistan in their opener at Nottingham on Friday. Earlier at the Captain’s meet in London, Indian skipper Virat Kohli had said that England, who are the tournament favourites, seem to be obsessed with becoming the first team to score 500 runs in ODI cricket.

“I was just going to say it really depends on these guys. They seem to be obsessed with getting to 500 before anyone else,” said Kohli while pointing to his English counterpart Eoin Morgan, who sat next to him.