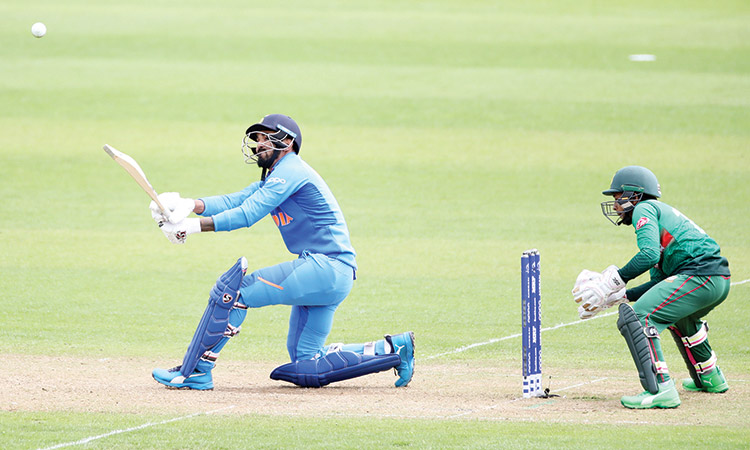 India’s KL Rahul plays a shot against Bangladesh during their warm-up match at Sophia Gardens in Cardiff on Tuesday. Associated Press

LONDON: KL Rahul’s century in Tuesday’s warm-up match against Bangladesh suggested he could be the answer to India’s search for a reliable number four batsman at the World Cup but the right-hander says he is happy to bat anywhere.

Two-time champions India continue to fret over the problematic batting position after a number of candidates failed their auditions in the buildup to the World Cup.

Chief selector MSK Prasad had made it clear that all-rounder Vijay Shankar was the first choice for the spot while Rahul, generally an opening batsman, was another option.

Batting at number four, Rahul managed only six in Saturday’s warm-up match against New Zealand but followed it up with 108 off 99 balls in their 95-run victory in Cardiff.

Rahul’s assured innings, which included 12 boundaries and four sixes, seems to have sealed the deal with Indian captain Virat Kohli saying his contribution was the “biggest positive” from the game.

“I’m really happy with how I’ve bounced back and this gives me lots of confidence,” Rahul told reporters after the game.

“Where I play is not for me to decide. It’s a team game and you need to be flexible. You need to be ready to bat, whatever role you are given, you have to take what is thrown at you.”

Rahul built a 164-run partnership for the fifth wicket with wicketkeeper Mahendra Singh Dhoni, who scored a century of his own, to give India a commanding total of 359.

“(Dhoni) just dominated the spinners and is striking the ball so well,” Rahul added. “It’s a great sign for us and it’s just a pleasure to watch him from the other end when he is playing like that.”

India begin their quest for a third World Cup title on June 5 when they take on South Africa at The Rose Bowl.

Meanwhile, even at 37, Dhoni manages to surprise cricket fans all across the globe. Be it his power-hitting or his extraordinary glove-work, Dhoni just keeps on raising the bar for himself and his fellow cricketers.

Not just his batting and wicketkeeping, even his on-field presence proves to be a blessing for Virat Kohli as he helps the Indian skipper in strategy making and setting fields for the bowlers while keeping from behind the stumps.

On Tuesday, one such incident was witnessed during the course of India’s second warm-up game against Bangladesh at the Sophia Gardens which the Men in Blue won comfortably by 95 runs.

Dhoni, while batting in the 40th over of the Indian innings, stopped Bangladesh leg-spinner Sabbir Rahman on his tracks and asked him to move the square-leg fielder towards his left. And just like an obedient ward, Sabbir did not even ask his captain Masrafe Mortaza and promptly moved the fielder as advised by the Indian wicketkeeper-batsman.