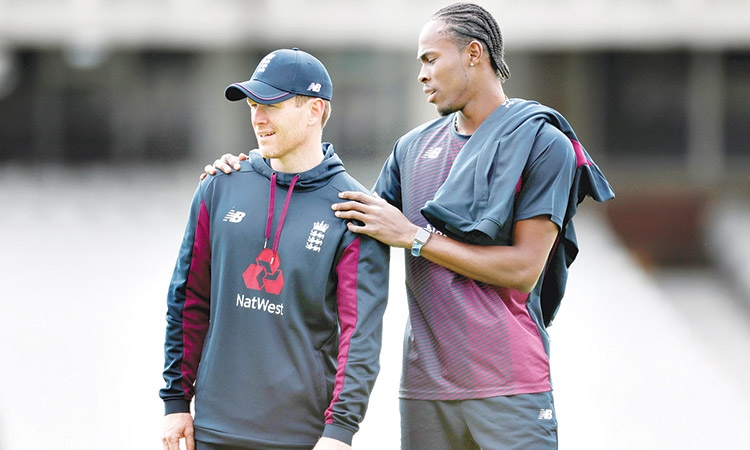 England’s Eoin Morgan (right) and Jofra Archer during a training session at The Oval, London, on Wednesday. Agence France-Presse

England launch the World Cup on Thursday as favourites to bludgeon their way to victory for the first time but will fear a Virat Kohli-inspired India and a hungry Australia.

The host nation have never won the tournament, with the last of their three losing appearances in the final coming in 1992, but there is a growing sense their current crop of players can end 45 years of pain.

Boasting a plethora of big-hitting white-ball specialists, England are the top-ranked team in the 50-over game, while Kohli’s India are also packed with superstars who have honed their skills in the Indian Premier League.

Reigning champions Australia, who won their fifth title in 2015, are boosted by the returns of star batsmen Smith and David Warner after both served bans for their role in a ball-tampering scandal.

New Zealand and South Africa will also harbour hopes of World Cup glory in the 10-team tournament, in which each side will play all the others to decide the semi-finalists.

Former winners Pakistan can never be ruled out and West Indies, featuring self-styled “Universe Boss” Chris Gayle for possibly the final time in ODIs, will fancy their chances of a first World Cup triumph since 1979.

In an age in which astonishing run-scoring feats have become commonplace, it may be the hard-pressed bowlers who determine the destiny of this year’s title, depending on the conditions for the event, which runs from May 30 until July 14.

Top-ranked England will undoubtedly start the tournament as favourites.

They were, however, strongly fancied to win the 2017 50-over Champions Trophy, which they hosted, only to lose to eventual winners Pakistan in the semi-finals.

England captain Eoin Morgan has urged his side to enjoy the pressure and expectation that comes with opening the World Cup at home.

“Everyone is going to feel that anticipation and excitement of playing the first game and it will be different than any other day and I will be encouraging guys to embrace it,” he said.

Batting has been the basis of England’s ODI rejuvenation, with Jason Roy, Jonny Bairstow, Joe Root, Morgan and the dynamic Jos Buttler among a top seven who can all change the course of an innings in the blink of an eye.

“It’s an exciting feeling being in this team as you have world-class players all around you and the opposition might get 370, but there’s a belief in the dressing room we can chase it down,” said England leg-spinner Adil Rashid.

A limp first-round departure at the 2015 World Cup in Australia and New Zealand was the catalyst for a transformation in England’s white-ball game based on aggressive batting, as exemplified by Jonny Bairstow and Jos Buttler.

England are even threatening to smash the 500-run barrier for the first time in an ODI innings, having set a new record total of 481 for six against Australia in Nottingham last year.

And their attack now has an extra threat in recently qualified Barbados-born fast bowler Jofra Archer.

India upset the odds to beat West Indies in the 1983 World Cup final at Lord’s under the captaincy of Kapil Dev and now boast another inspirational leader in star batsman Kohli.

Australia want to switch attention back onto the pitch after the “sandpapergate” scandal, which led to year-long bans for Smith and Warner.

Former Australia captain Smith is braced for barracking from the crowds at the tournament, which takes place in England and Wales.

Smith made 116 against England as Australia beat the World Cup hosts and favourites by 12 runs in a warm-up game in which he was booed and called a “cheat”.

“It’s water off a duck’s back and it doesn’t bother me. I try to black it out,” said a focused Smith.

“They call it ‘white noise’. When I’m out in the middle I don’t pay attention to the crowd or what they’re saying.”

South Africa will be desperate to shed their tag of World Cup chokers while consistent New Zealand, losing finalists in 2015 and repeatedly in the last four, boast a clutch of match-winners — batsmen Kane Williamson and Ross Taylor as well as seamers Tim Southee and Trent Boult.

South Africa coach Ottis Gibson is convinced the pressure is all on the tournament hosts and cited comments by England quicks Stuart Broad and James Anderson -- both of whom no longer play ODI Cricket -- as an example.

“I heard somewhere that my two very good friends Broad and Anderson have said that England will have to do something really bad not to win this World Cup,” recalled Gibson, who knows the pair well from his time as England bowling coach.

“As far as they are concerned England have won it already.”

Former West Indies fast bowler Gibson added: “To play the hosts, the number one team, is the best way to start, because it gives us a real sense of where we are and what we need to do going forward.”