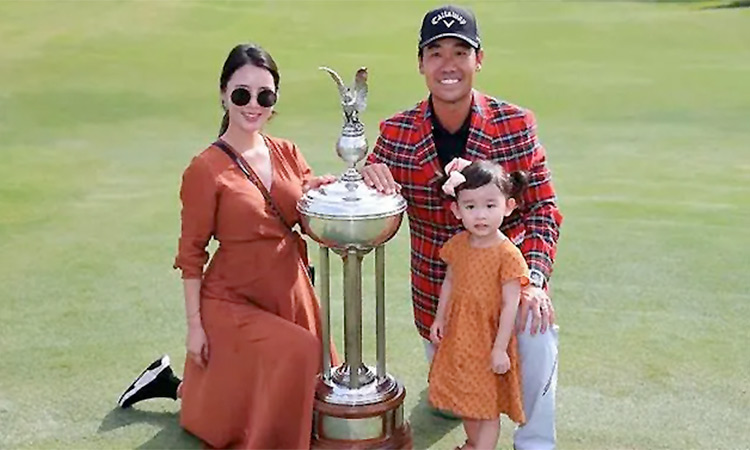 Na continued his mastery of the classic course in Fort Worth, Texas, starting the day with a two-shot advantage that was never really challenged.

“It feels great,” said Na, who celebrated with his toddler daughter, Sophia, in his arms.

Na, 35, boasts an impressive record at Colonial, where he thrust himself into contention with a second-round 62. That was his third score of 62 or better on the course, where he matched the record of 61 on the way to a fourth-place finish last year.

He said he eyed the club’s “wall of champions” on the first tee Sunday, “and in my head I engraved my name on it.

“Every year I come here I know I had a chance to win and I knew before my career was over I was going to definitely win here,” added Na, who believes the compact course is one of “seven or eight” that offer him a chance to win on the US tour without a big-hitting game. It was the second win in less than a year for the 35-year-old Na, a Las Vegas resident who was born in South Korea but came to America when he was just 8 years old. He last won at the 2018 Greenbrier event in July, and his best finish this season prior to Fort Worth was a tie for fifth at the WGC Match Play in March.

Meanwhile, England’s Bronte Law sees her first US LPGA Tour title as the beginning of something much bigger.

Law got off to a hot start with four birdies on the front nine then delivered the knockout blow with another birdie on 16 to win the Pure Silk tournament in Williamsburg, Virginia, by two strokes on Sunday.

“Oh my gosh, that was the biggest fight of my life,” said Law, who closed with a final round of four-under 67 for her wire-to-wire win.

Law finished with a 17-under 267 total as she held off a hard-charging field that included Madelene Sagstrom, Brooke Henderson and Nasa Hataoka. The trio tied for second at 15-under on the Kingsmill Resort course. The 24-year-old Law, who is in her third season on the Tour, said this is just the start of her first place trophy collection.

“I came in this week with the sole intention of getting one better. It feels really good,” she said.

Law got some breaks on Sunday -- including one where Sweden’s Sagstrom almost holed out on 18 with an eagle but the ball hit the pin and cup and rolled back 20 feet. She finished with a par.

But Law said hard work, not luck, got her to where she is. “I don’t believe in destiny. I believe in hard work and determination. I stayed so focused out there and my caddie did good job of keeping me calm,” she said.

Law, who was an amateur standout in Britain, placed second in her most recent start at the Mediheal Championship earlier this month.

“I struggled with my driver a little bit out there, and I really had to stay strong and just play to my advantages and just really try to find those fairways because I was hitting my irons really good,” she said.