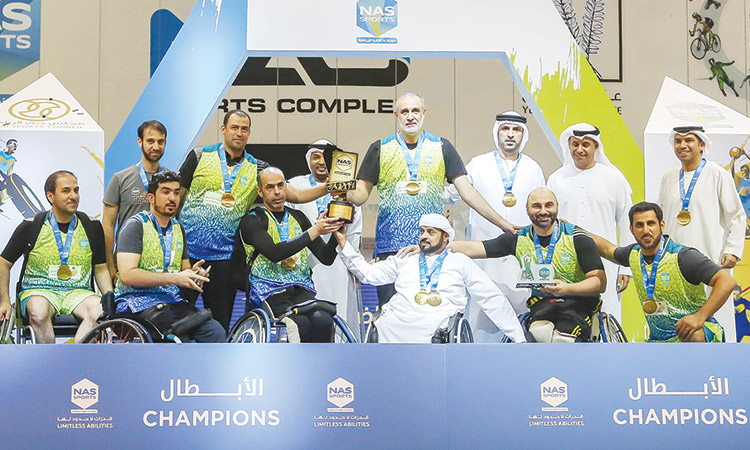 Dubai Municipality pose with the trophy after the match.

The Municipality men, who defeated the same opponents 63-46 to win the title 12 months ago, seemed headed for another facile win as they entered the fourth quarter with a comfortable 52-38 lead. However, Dubai Public Prosecution, who had lost the final in the past three seasons, staged a spirited rally and closed the gap, but eventually finished short.

The runners-up, however, had the consolation of seeing their star Salah Ahmed retain the top-scorer award. Mohammed Fadhil Al Hameli, Chairman of the UAE Paralympics Committee and a Board Member of the International Paralympic Committee, presented the awards in the presence of Hassan Al Mazrouei, Director of NAS Sports Tournament.

“I am really proud of how we played as a team right through the tournament,” said Dubai Public Prosecution’s Cameron Swan, a native of Birmingham in England who was playing in the Nad Al Sheba Sports Tournament for the second year.

“Tonight, we did not get the result we wanted in the final and that is really disappointing, but we should be proud of the way we have played. I believe we are getting close and I am looking forward to coming back next year and hopefully return with the gold medal 12 months from now.”

“I am really happy because this year we have won the men’s open and team titles,” said German Zunica.

“For me, this tournament is amazing. The facilities here at the Nad Al Sheba Sports Complex are fantastic. This is an amazing place and I am looking forward to the next year.”

MGM, DHL in final Ameer Hamza’s sensational knock of 95 guided MGM Cricket Club Sharjah past Titans Cricket Club and into the final of the NAS Cricket T10 Tournament, where they will meet DHL for the title.

Hamza played a virtual lone hand as MGM posted 148 for 4 on the board, with the next-best score of the innings being Salim Qudoos’ unbeaten 16. Coming in at number four, he scored his 95 runs off just 25 balls, smashing 7 fours and 10 sixes. Hamza and Qudoos added 88 runs for the fourth wicket off a mere 23 balls, and Qudoos’ contribution in the partnership was 12.