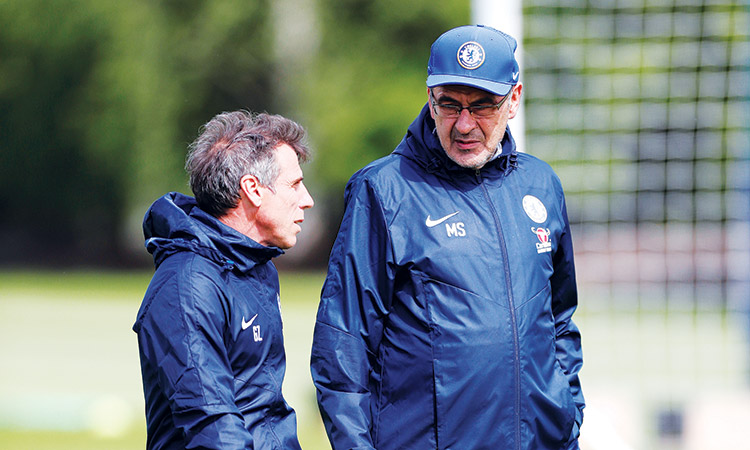 Chelsea manager Maurizio Sarri plans showdown talks with the club’s hierarchy after next week’s Europa League final to see if they want the Italian to remain in charge next season.

Sarri’s side recovered from a mid-season slump in time to secure Champions League football next season via a third-placed finish in the Premier League, and could end the season with a trophy when they face Arsenal in Baku on May 29.

However, Sarri’s style of football has not been universally embraced by the Chelsea fans during his first season in charge and rumours in his homeland have linked the former Napoli boss with the vacant managerial roles at Juventus and Roma.

“I will speak to the club as I want to see if they are happy with me or not,” said Sarri on Wednesday.

“I have two more years on my contract.”

The Milan stock exchange does not appear to share Chelsea fans’ reservations. Juventus shares rose 5.60 per cent on Wednesday afternoon following reports in the Italian press the Italian champions had been in contact with Sarri.

Juventus are looking for a manager after parting last week with Massimiliano Allegri, who won the Italian title in each of his five seasons in charge. Juventus shares, which dipped below 0.60 Euros last May before Cristiano Ronaldo arrived, reached 1.46 euros on Wednesday.

Sarri insisted any decision on his future should not be dependent on the outcome of the Europa League final.

“If the situation is like this then I want to go immediately,” he added.

“Ten months of work and then I have to play everything in 90 minutes, that is not right. You are either happy about my work or not happy.”

Sarri, though, defended his record after guaranteeing the club’s principal target for the campaign of a return to the Champions League and reaching two Cup finals.

“I think that we had a good season, with a lot of problems of course,” he added.

“We finished third in the Premier League, final of League Cup, a very difficult competition, now we have the possibility to play the final of the Europa League.

“If we are able to win then it will become a wonderful season.”

Meanwhile, Atletico Madrid coach Diego Simeone has pledged his future to the Liga club despite an expected exodus of senior players from the Estadio Metropolitano in the close season.

Argentine Simeone, 49, has said he will oversee the changing of the guard as he looks to rebuild the 2014 La Liga winners, who came second this term behind runaway champions Barcelona.

“I like my job, I feel very identified and committed to the club. I know that year-on-year it’s always more difficult and that makes us see our real selves and generate enthusiasm,” he told a news conference after a friendly with Beitar Jerusalem.

“Next season we’ll bring in players with great enthusiasm and hopefully adapt to the responsibility that means being at Atletico. We’ll need a new defence with a lot of new pieces,” he added after Tuesday’s 2-1 defeat at Teddy Stadium in Jerusalem.

His squad faces a major overhaul including the departure of the first-choice back four, with Juanfran, Diego Godin and Filipe Luis leaving on free transfers, while Lucas Hernandez is joining Bayern Munich for 80 million euros (£70.5 million).

Midfielder Rodrigo has also been heavily linked to English champions Manchester City in the British media, while there has been speculation about Spain forward Diego Costa’s future.

In February, former Argentina midfielder Simeone, who spent two separate spells at Atleti as a player, renewed his contract until 2022, meaning he is headed for a decade in charge.

He has won seven trophies with the club, including two Europa League titles, one Copa del Rey and one La Liga title, and has taken them to two Champions League finals, losing in 2014 and 2016 to Real Madrid.