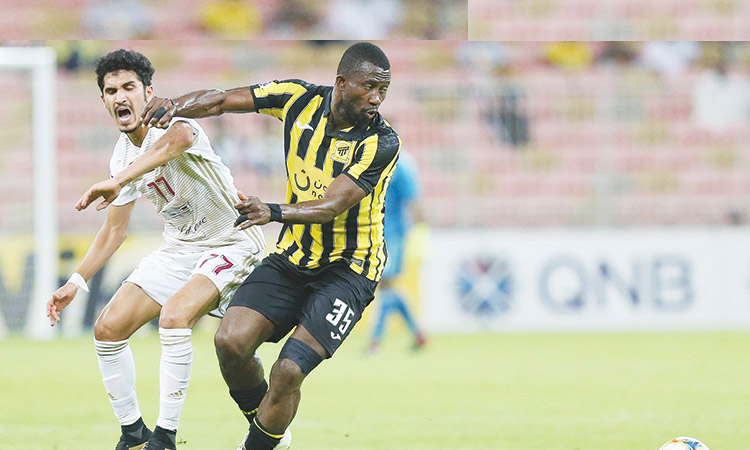 Al Ittihad and Al Wahda played out a 1-1 draw at the King Abdullah Sport City Stadium on Matchday Six of the 2019 AFC Champions League Group B on Tuesday.

Both teams had already qualified to the knockout stage prior to the game, and the top spot in Group B was at stake. Al Wahda occupied the spot with 12 points going into the match, while Al Ittihad sat second, two points behind.

A cagey start to the game meant the fans at King Abdullah Sport City had to wait 16 minutes for the first attempt on either goal. The chance came Al Ittihad’s way when Carlos Villanueva seized the ball after a misplaced pass by Rim Chang-woo.

The Chilean midfielder tried to chip goalkeeper Rashed Ali who was off his line. The Al Wahda goalkeeper was just able to make contact, tipping the ball behind for a corner kick.

Rim tried his luck from distance at the other end for Al Wahda’s first shot on target 10 minutes before the break, but Fawaz Al Qarni was in the right place and caught the ball.

The deadlock was finally broken by the hosts in the 68th minute. Young midfielder Khalid Al Samiri delivered a chipped pass for Romarinho and the Brazilian turned and placed the ball from inside the box into the far corner.

Al Ittihad’s lead lasted as little as three minutes before Al Wahda struck back. Mohammed Al Menhali, filling in at left-back on the night, fed Tareq Al Khaddeim down the wing before charging into the box to collect the return pass.

Al Menhali’s first attempt was blocked by goalkeeper Al Qarni, but the ball fell back to the number 2 who slotted home the equaliser.

With the draw, Al Wahda finished top of the group with 13 points, while Al Ittihad finished as runners-up with 11.

The two teams will await the result of the Group A fixture between Zobahan and Al Nassr to find out who they face in the Round of 16.

Meanwhile, former Barcelona star Paulinho scored the only goal of the game to take two-time winners Guangzhou Evergrande into the AFC Champions League last 16 on Wednesday.

The midfielder’s second-half header was the difference in a nervy 1-0 home win over Daegu of South Korea, who had only needed to avoid defeat to progress.

Cannavaro’s side knew they had to beat Daegu to leap-frog their visitors into the runners-up spot in Group F behind Sanfrecce Hiroshima of Japan.

But the Chinese Super League (CSL) side were missing their potent Brazilian attacking midfielder Anderson Talisca, out with a knee injury.

Earlier, Iraq’s Al Zawraa defeated Emirati club Al Wasl 5-1 to wrap up their AFC Champions League engagements on Tuesday, a day which saw three matches being played and one postponed.

However, all the matches scheduled for the day were of only academic interest as the two qualifiers from Groups A and B were already decided. Iran’s Zobahan and Saudi Arabia’s Al Nassr had already secured the two qualifying spots from Group A.

Tuesday’s match between Al Nassr and Zobahan in the Iraqi holy city of Karabala was however postponed by the AFC for security reasons that were not specified, although it is apparent that the ongoing political tensions.

“The AFC took the decision with the support of all parties concerned in the interests of safety. The AFC puts the safety and security of all stakeholders at the centre of all its decisions,” the Asian football body said on its website.

“The match will now be rescheduled and the new date will be announced as soon as possible,” the AFC statement added.

Earlier, Ala Abbas was on target for Al Zawraa twice as they bounced back from a goal down to thrash hosts Al Wasl in Dubai.

Abbas cancelled out Hassan Mohannad’s fifth minute goal in the 22nd minute and added one more in first half stoppage time to help Al Zawraa take a 2-1 lead into the second half.

Ahmed Fadl, Ahmed Jalal and Mohamed Abdulrahman added three more goals in the second half to complete the rout.