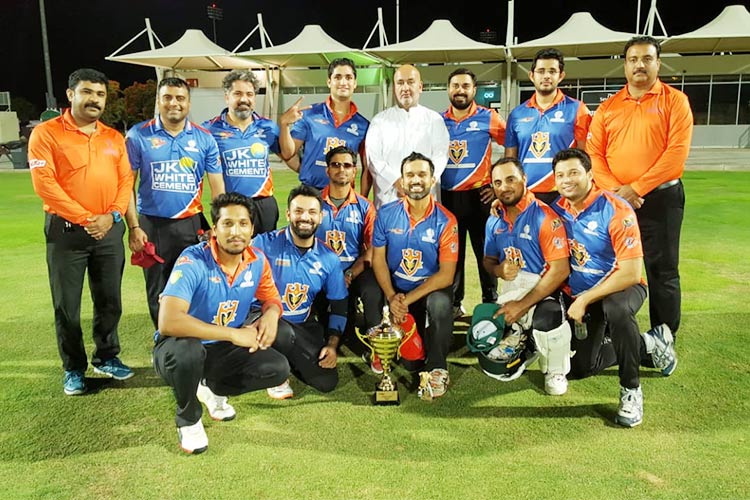 Dubai Daredevils pose with the winners’ trophy after the match.

An unbeaten century by man of the match Haroon Ghaus and his 113-run partnership with Aziz Ansari (50) took Dubai Daredevils to a narrow five-run win over Dubai Mammoths in the final of the Dubai Cricket Council’s Mammoths by Night Cricket League at the Sevens ground in Dubai over the weekend.

Daredevils won the toss and had Mohit Raghav (21) and Aashish Sharma (8) back in the pavilion with the scoreboard reading 41-2.

But Aziz and Haroon showed nerves of steel on their way to half-centuries. Aziz reached the 50-run mark in 47 balls with the help of  six boundaries before being dismissed.

Haroon continued to plunder runs at his will and with Bilal Azmat giving him company at the other end. Haroon reached the magical three-figure mark of 108 from barely 71 balls, hitting three sixes and nine fours during his stint at the crease. Bilal remained unbeaten on 13 from seven deliveries

Dubai Mammoths began their chase in right earnest with Yasir Khawaja (20) and Vriitya Aravind (28) adding 47 runs for the first wicket.

And despite three wickets falling in quick succession Qais Farooq (47) and Harsh Bobade (57) anchored the innings and kept the pressure on Daredevils. Abhishek Chavan’s hit an unbeaten 23 to spur the chase and gave them hope towards the end but Mohit Raghav (3-33) and Aashish Sharma (3-36) bowled well in tandem to restrict Mammoths to 204 for 8.

Meanwhile, Noor Al Yemen continued their winning spree in the 31st Sharjah Ramadan Cup. With a 33 run victory over Kashmir Stars at the Sharjah Cricket Stadium on Saturday night they maintained a clean slate of three wins out of three matches.

Kashmir Stars kept faltering at every hurdle and ended up on 163 to make it three losses from three matches.