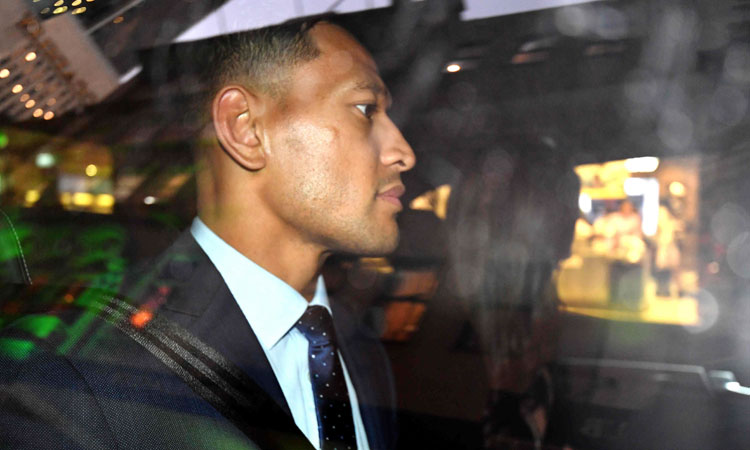 Wallabies star Israel Folau has failed to appeal against his sacking over homophobic comments within a 72-hour deadline, Rugby Australia said on Monday, meaning his contract “will be terminated.”

The devoutly Christian fullback was found guilty of a “high-level” breach of the governing body’s code of conduct for saying “hell awaits” gays and others he deems sinners and a three-person tribunal decided it warranted an end to his lucrative four-year deal.

Folau was on Friday given 72 hours to appeal, which would have triggered another hearing with a new panel, but he has opted against that course of action.

He has yet to make clear his intentions but could take the divisive case, which has pitted his right to religious expression against restrictions on hate speech, to the courts.

“The 72-hour window for Israel Folau to appeal his high-level code of conduct breach and sanction has expired,” said Rugby Australia in a statement.

“As Folau has not notified the panel of his intention to appeal, the code of conduct process has now formally concluded.

“With the code of conduct matter complete, Folau’s employment contract will be terminated,” it added.

After being found guilty, Folau issued a statement saying he was “deeply saddened” and considering his options.

He also made clear that “upholding my religious beliefs should not prevent my ability to work or play for my club or country.”

“The Christian faith has always been a part of my life, and I believe it is my duty as a Christian to share God’s word,” he added.

It remains online and followed a similar tirade last year, for which he escaped sanction.

Rugby Australia chief Raelene Castle has said there were no winners from the row and admitted regret to not foreseeing further potential problems after he was let off last year.

She added: “Our clear message to all rugby fans is that we need to stand by our values and the qualities of inclusion, passion, integrity, discipline, respect and teamwork.”

While Folau’s post sparked outrage from some quarters, others have come to his defence, including two former Wallabies coaches, Alan Jones, now a conservative radio broadcaster, and Bob Dwyer.

“I think he’s a massive example for good in our society. At a time in sports when we are seeing some of the worst behaviours in sport, we’ve got this guy who’s the exact opposite,” Dwyer told the Sydney Morning Herald at the weekend.

“I think it would be a sad, sad day if he’s lost to Australian sport.”