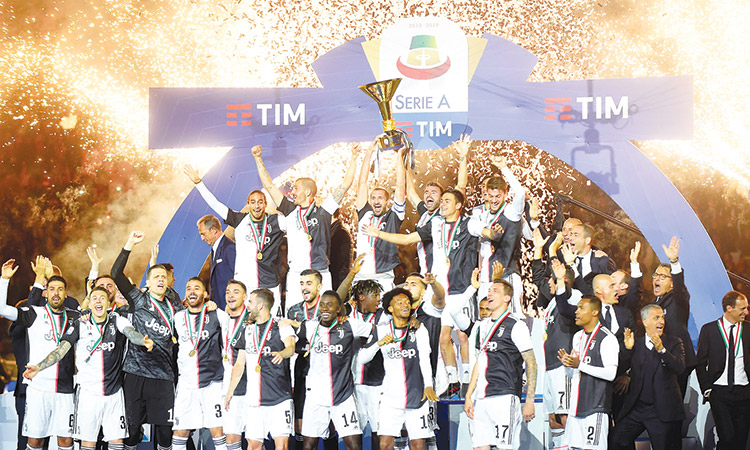 Juventus players celebrate with the trophy after being crowned Italian League champions at the end of their match against Atalanta on Sunday. Agence France-Presse

Departing Juventus coach Massimiliano Allegri bid farewell to the Turin fans in the team’s final home game this season on Sunday, a 1-1 stalemate against Atalanta that kept the visitors’ hopes of a first-ever Champions League qualification alive.

The Juventus fans paid tribute to Allegri, who the club’s management have decided will not be their coach next season, despite winning 11 trophies in five years, but missing out on winning the Champions League.

Juventus have already wrapped up their record eighth consecutive title, which was Allegri’s fifth.

The team were officially presented with this year’s Serie A trophy — the first for Portuguese superstar Cristiano Ronaldo.

Former World Cup winner Andrea Barzagli played his final home game after eight years in Turin, and received a resounding ovation when he came off after an hour.

On the pitch, forward Mario Mandzukic struck ten minutes from time to cancel out Josip Ilicic’s 33rd-minute goal for Atalanta.

The point keeps Atalanta’s hopes of a first Champions League campaign alive, which they can seal if they beat Sassuolo in their final game next weekend. Atalanta moved third ahead of Inter Milan on head-to-head after Luciano Spalletti’s side lost 4-1 at Napoli.

Juventus and second-placed Napoli are already through to the Champions League next season.

AC Milan are just one point behind Inter and Atalanta in fifth after Krzysztof Piatek and Suso struck in a 2-0 win over Frosinone.

Inter will play their final match against Empoli, who are trying to avoid relegation.

Polish striker Piatek got back scoring on 57 minutes at the San Siro, with Spanish winger Suso adding a second nine minutes later.

Milan goalkeeper Gianluigi Donnarumma saved a Camillo Ciano penalty before Piatek broke his five-match scoring drought with his 22nd goal of the season.

“It was a difficult game. We knew it would be and that Frosinone would come here with the right attitude,” Gattuso told Sky Italia. “We had a scare, we thank Donnarumma for getting us out of trouble and can look to the next game.

“In my view, there has been a lot of chatter and I’ve been considered on the way out since pre-season. The table talks. Look over the last six years at how many points Milan earned and look where we are now. I think we did what we had to do.”

The home side were booed off by the San Siro crowd after a poor first half performance against second-bottom Frosinone and things promised to get worse when Ignazio Abate bundled over Luca Paganini to concede a penalty four minutes after the break.

However, Donnarumma sprang to his left to keep out Ciano’s 50th minute spot kick before Piatek prodded in the opener from close range seven minutes later.

Suso then curled a wonderful free-kick into the net off the crossbar after 67 minutes to double the hosts’ advantage.

The fans gave long-serving defender Abate a standing ovation when he was substituted in the closing stages. The 32-year-old was making his final home appearance after 10 years at the club ahead of his departure at the end of his contract.

Milan are at least assured of a place in next season’s Europa League, along with Roma, who were held to a goalless draw at Sassuolo on Saturday.

Lazio, in eighth, are sure of playing in the Europa League group stage thanks to their Coppa Italia victory.

Empoli moved out of the relegation zone at the expense of Genoa, who were held 1-1 by Cagliari, and are now 18th ahead of next week’s clash with Fiorentina, themselves just three points off the drop zone.