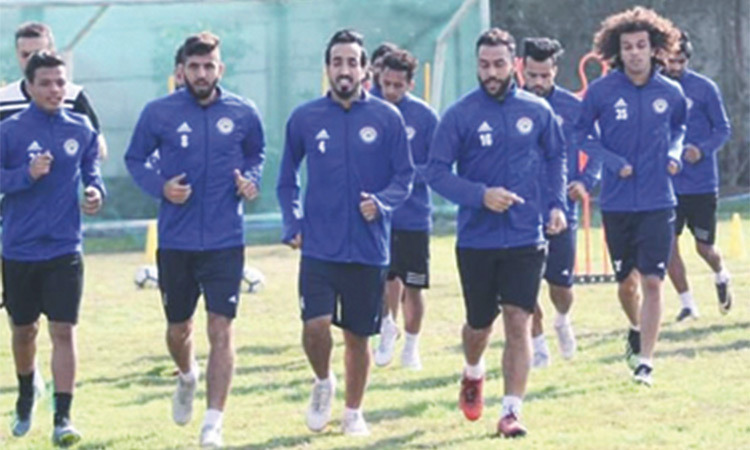 Al Zawra players attend a training session ahead of their match against Al Wasl.

Pride and an honourable third place finish in Group A are at stake as UAE’s Al Wasl welcome Iraq’s Al Zawraa to Zabeel Stadium on Matchday Six of the 2019 AFC Champions League on Tuesday.

Both sides were eliminated on the previous matchday as Zobahan and Al Nassr booked the two Round of 16 tickets from the group.

Al Zawraa’s bright return to the AFC Champions League ended in heartbreak a fortnight ago. The Iraqis looked destined for a 2-1 home win over Zobahan when Reza Habibzadeh struck late in added time to rescue a point for the visitors and consign Hakeem Shaker’s men to early elimination.

Al Wasl needed a win in Riyadh on Matchday Five, but instead were three goals down by the hour-mark and Khalil Khamis’ strike at the death served only to lessen the damage as the Emiratis were eliminated at the group stage for the second year running.

The match will be the last in the AFC Champions League for both teams until 2021 at least with Al Wasl settling for a bottom half finish in the UAE Pro League with one game to go and Al Zawraa finding themselves in fourth place, 22 points off the pace in the Iraqi League.

Both sides have progressed to the next round following positive results on Matchday Five; Zobahan earned a last-minute draw at Al Zawraa to stay unbeaten in five, while Al Nassr were clinical in a 3-1 triumph over Al Wasl that saw them make it three wins on the trot.

For Zobahan, a place in the Round of 16 has been booked for the third time in four years, but the Isfahan-based side have been knocked out at that stage in each of the two previous occasions. Avoiding defeat on Tuesday will ensure they finish top of the group and go into the knockout stage unbeaten.

With both sides already through to the next round, Al Duhail welcome Al Hilal to Abdullah bin Khalifa Stadium for a heavyweight clash at the top of Group C of the 2019 AFC Champions League on Monday.

The two teams go into the final game of the group stage (also the last of their respective seasons), following contrasting results on the domestic front.

Al Duhail made up for the disappointment of conceding the Qatar Stars League title to rivals Al Sadd by defeating the latter 4-1 in the final to lift the Amir Cup trophy last week.

Al Hilal had a blank season, finishing runners-up to Al Nassr in the Saudi Pro League and being eliminated in the semi-finals of the King’s Cup by eventual winners Al Tawoun.