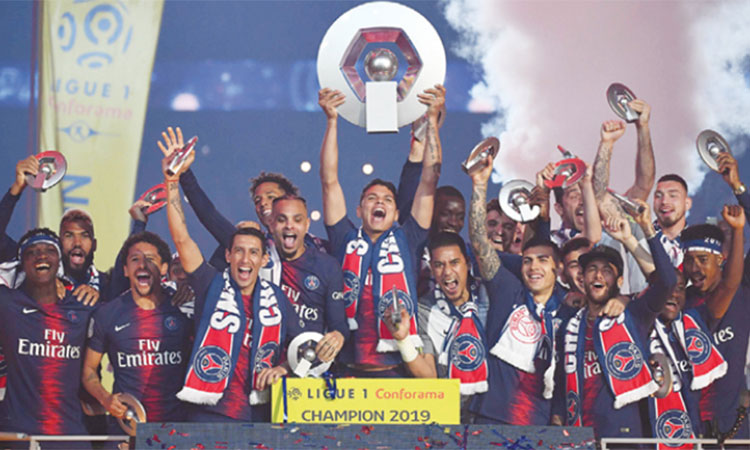 PSG’s players celebrate with the trophy at the end of their French League match against Dijon in Paris on Saturday. Agence France-Presse

Monaco virtually made sure of their French Ligue 1 survival with a 2-0 win over Amiens on Saturday while champions PSG signed off their home campaign with Kylian Mbappe scoring his 32nd league goal of the season in a 4-0 win over Dijon.

Radamel Falcao and Alexsander Golovin scored in either half at the Stade Louis II to take Monaco to 36 points and three above the drop zone with one match left to play.

Monaco, the 2017 champions, are not mathematically safe but they have a three-point lead over Caen who occupy the relegation play-off spot with a goal difference of seven.

While Monaco coach Leonardo Jardim was cutting a relieved figure, he found himself discussing the fact that Falcao was not wearing an anti-homophobia armband which had been distributed by the league.

Guingamp were already relegated while Dijon were pushed to the edge of the trap door when they lost 4-0 at PSG.

French World Cup winner Mbappe, back from a three-match ban for a red card in the French Cup final, scored two of the goals to take his league tally to 32 with one game left.

He is the first French player to reach that figure since Herve Revelli scored 31 for Saint-Etienne in the 1966/67 season. PSG were presented with the Ligue 1 trophy for the eighth time against a background of fireworks after a win which preserved their 16-point lead.

Saturday’s result was never in doubt after Angel Di Maria and Edinson Cavani had given PSG a 2-0 lead inside the first four minutes.

Suspended Neymar, the world’s most expensive footballer, watched the game from the stands before joining his teammates in a lap of honour in front of their fans at the Parc des Princes.