Kompany to leave Man.City and join Anderlecht as player-manager - GulfToday

Kompany to leave Man.City and join Anderlecht as player-manager 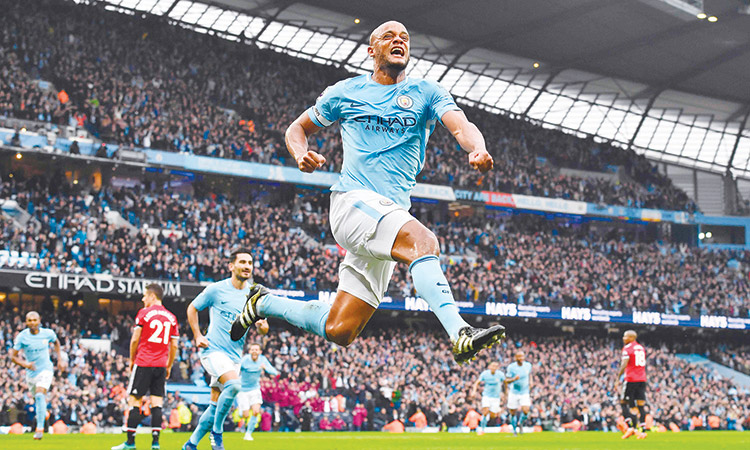 Skipper Vincent Kompany will be remembered for his influence on and off the pitch, a contribution that established him as the heartbeat of Manchester City’s greatest era.

Belgian defender Vincent Kompany said on Sunday he would be leaving Manchester City and joining Anderlecht as player-manager after helping the Premier League club to become the first team to win the English domestic treble.

“We’ve just seen the close of an incredible season. My 11th as a Blue. I cannot believe I’m writing this but... also my last as a Blue,” the City captain wrote in an open letter to fans on his Facebook page (www.facebook.com/pg/vincentkompany/).

“Man City has given me everything. I’ve tried to give back as much as I possibly could. How often does someone get the chance to end such an important chapter, representing a club with such great history and tradition, in such a great fashion?”

“The time has come for me to go now.” The central defender said in the second part of his letter released shortly afterwards that he would be taking on a new challenge at Belgian club Anderlecht.

“I choose to be grateful for the past but remain ambitious and driven for the future. For the next three years, I will take up the role of player-manager of RSC Anderlecht,” he added.

“It’s the most passionate yet rational decision I’ve ever made. As a footballer, I was born and raised at Anderlecht. Since the age of six, I have been one with that club. A history of 34 league titles, they are second to none.

“I want to share my knowledge with the next purple generations. With that, I will also put a bit of Manchester in the heart of Belgium.”

City crushed Watford 6-0 in the FA Cup final on Saturday to complete the unprecedented treble of league championship and both domestic cups, after which Kompany said they were the best team in the world.

Kompany scored with a thunderous long-range strike to decide their penultimate league match of the season against Leicester City, a key moment in their retaining the Premier League title. Vincent He  will be remembered for his influence on and off the pitch, a contribution that established him as the heartbeat of City’s greatest era and led the club to a first top-flight title since 1968 in 2012 and goes down as one of the most iconic players in the club’s history.

“It’s cliche to say it but it’s also so true: without my team mates I would have never been here today,” he added.

“We fought many battles together. Side by side. In good times and in bad. So to all of you, from the 2008-2009 squad to today’s domestic Treble winners: I owe you guys!

“A special word also to (manager) Pep (Guardiola) and the backroom staff: you’ve been superb. You’ve followed me through so much hardship. You made me come back stronger every time. Thank you so much.”

City midfielder Kevin de Bruyne led the tributes for his compatriot, describing Kompany as a “big player, big personality and big leader” in a tweet.

Youngster Phil Foden wrote on Instagram: “Looked after me from day one. Led by example, showed everyone what it means to be a leader, wear their heart on the sleeve and give everything for this club.”

City right-back Kyle Walker said on Instagram: “From skip to gaffer, the man has it all!! Since I walked through the door Vinny has been amazing to me.

“He helped me settle in and I’ve learned a lot from the big man. Good luck with everything skip, you’ll be missed #CaptainFantastic #Legend.