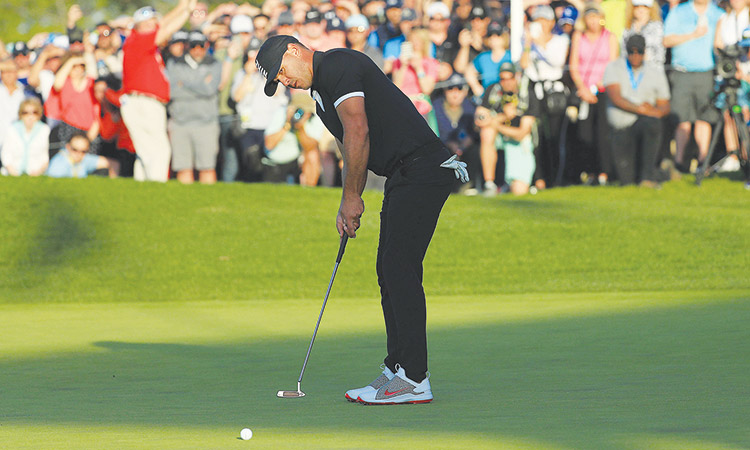 Brooks Koepka putts on the 16th green during the third round of the PGA Championship golf tournament at Bethpage Black in Farmingdale on Saturday. Associated Press

Third-ranked Koepka, in prime position for his fourth major title, fired a level-par 70 at Bethpage Black to stand on 12-under 198 entering Sunday’s final round.

“I feel confident. I feel good. I feel excited,” Koepka said. “It’s nice to have a seven-shot cushion. Just hit the center of the greens and try to par this place to death.

“(I’ll) just stick to my routine, do what I’m doing. I’m not thinking of seven-shot lead, winning the tournament. I’m thinking of what I need to do on the first shot first tee.”

“It’s going to take something special to catch Brooks,” Johnson said. “But it’s definitely do-able on this course.”

The best final-round comeback by a PGA winner was seven strokes by John Mahaffey in 1978.

“We’re all pretty much playing for second,” List said.

Matt Wallace, trying to become the first Englishman to win the PGA since Jim Barnes in 1919, shot 70 to share sixth on 206 with Japan’s Hideki Matsuyama.

No one in major Golf history fired a lower 36-hole score than Koepka’s 12-under 128, and his seven-stroke advantage was the second-largest major halfway lead, trailing only Henry Cotton’s nine-shot edge in the 1934 British Open.

If Koepka does capture the Wanamaker Trophy and the $1.98 million (1.77 million euros) top prize, he will be the first man to own back-to-back titles at two majors simultaneously. Koepka seeks a third consecutive US Open crown next month at Pebble Beach.

“He’s definitely, in these events, playing on a different level than most anyone else,” four-time major winner Rory McIlroy said of Koepka. “It’s awesome. It’s so good. It’s great to watch.”

Koepka’s routine tee blast and wedge approach made him a threat when he found the fairway. He missed a six-foot birdie putt at the first but sank a five-footer at the second and a three-footer at the fifth to reach 14-under and lead by eight.

From there, Koepka grinded through troubles with success to sustain his huge lead.