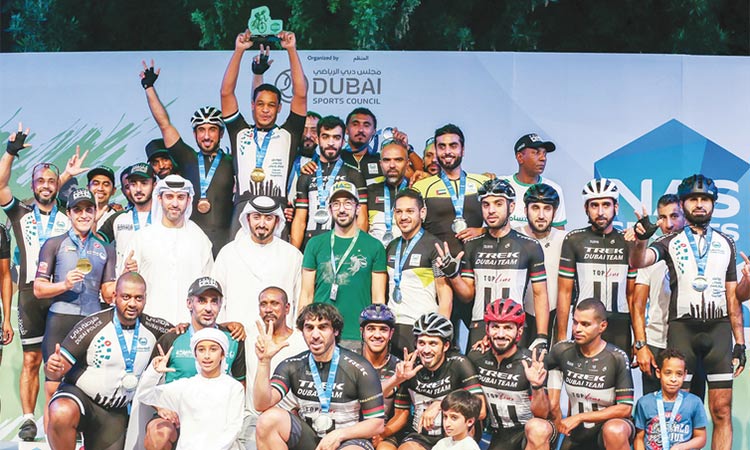 Participants pose with dignitaries after the NAS Cycling Championship on Saturday.

Osama Al Shafar, President of the Asian Cycling Confederation and UAE Cycling Federation, has hailed the impact of the NAS Cycling Challenge in the growth of the sport in the country.

A part of the Nad al Sheba Sports Tournament since the first year, the two-night 7th NAS Cycling Challenge came to a close on Saturday night with more than 400 participants competing in three different categories - UAE National Women, Open Category Women and UAE National Men -- over a distance of 77 kilometres.

Dubai Police stole the limelight on the second night of the NAS Cycling Challenge with two winners: Samah Khaled in the Open Women’s Category and Mansoor Al Blooshi in the UAE National men’s category.

More than 650 participants had taken part in seven categories on the opening night of the NAS Cycling Challenge, and Al Shafar said those impressive numbers are a testimony to the growth of cycling in the country.

“If you look at the numbers at the NAS Cycling Challenge, we had 200 cyclists take part in the first year and now in this seventh edition, we have seen more than 1,050 participants.

“So, there seems to be a direct relation between the growth of the NAS Cycling Challenge and the growth in the number of registered cyclists in the country.

“The NAS Cycling Challenge has played a big part in the growth of the sport in the country, attracting both Emiratis and expatriates, men and women, to the sport and we thank Sheikh Hamdan Bin Mohammed Bin Rashid Al Maktoum, Crown Prince of Dubai and Chairman of Dubai Sports Council, for his guidance and generous support to sport in general and cycling in particular.

“The UAE Cycling Federation has been very lucky to have cycling included in the NAS Sports Tournament from the first edition, and being a part of this hugely popular community initiative has undoubtedly had an impact on the popularity of cycling among both citizens and residents.”

Meanwhile, led by a brilliant unbeaten 70 from Mohammed Sagheer and a blazing 16-ball 49 (2x4s, 6x6s) from Tharanga Jayasinghe, DHL defeated Dubai Exiles RFC by 57 runs to book their place in the semi-finals of the NAS Cricket T10 Championship, which is being held at the Wombats Cricket Ground in Jebel Ali.

In the other quarter-final match of Saturday night, Naveed Anjum and Mohammed Hassan both chipped in with half centuries as MGM CC Sharjah defeated DP World by 24 runs.

Coming in to bat in the third over, at the fall of the second wicket with 48 already on the board, Sagheer and Jayasinghe scored at a frantic pace, adding 82 runs for the fourth wicket in a mere 4.2 before Jayasinghe became the third of Ejaz Ali’s four victims.

Faced with a daunting target, Dubai Exiles made a spirited bid, but could score no more than 133 for 2, with Clint Berkenshaw smashing a 28-ball 64 (3x4s, 6x6s) and Harsh Udeshi scoring an unbeaten 34 off 15 balls (3x6s), before Lee Clough’s late fireworks when he hit four sixes and a four off the six balls he faced to return unbeaten on 29.