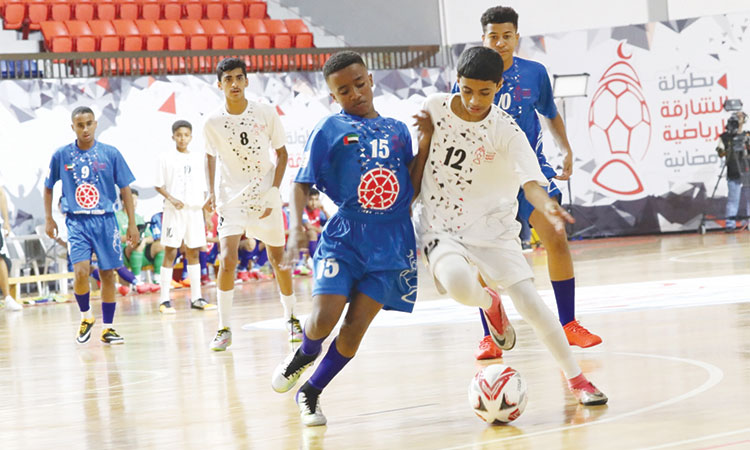 Fierce competition on show during the sixth day of the Sharjah Ramadan Futsal Championship.

Sharjah: After epic semi-finals, which saw fierce competition on the sixth day of the Sharjah Ramadan Futsal Championship, teams Fast and TG secured their spots in the U-14 championship final.

Meanwhile, TG crushed Wasit Youth by seven goals in the other semi-final.

The first match on Thursday evening picked up pace early on. Quattro player, Rashid Al Shamsi put his team in the lead after a brilliant goal in the fifth minute of the game. However, their lead was short-lived, as Fast’s Ahmad Al Shimari tied the game soon after, and team-mate Ghaith Lutah kept the scoring momentum going with another spectacular goal.

Quattro came back in the second half with their best offense. However, Ghaith Lutah stopped them in their tracks, scoring a third and winning goal for his team. With a final score tally of 3-1, Fast has made a convincing entry into the U-14 Championship final, which will be held on Sunday.

TG’s attacking approach from the go set the pace of the game. In the very first minute, Obaid Bu Samah got the scorekeepers working by registering the match’s first goal. TG, while at ease with a quick score, maintained pressure on the opponents. One goal by Saif Al Kaabi and the other by Al Numai followed. By the end of the first half, TG had established clear dominance with a 3-0 score.

The second half had just started when Bu Samah struck again, scoring the fourth goal for his team. Meanwhile, Wasit Youth kept their offense going, and Abdulrahman Al Shamsi scored a great goal amid mounting pressure. With the score set at 4-1, TG’s players retaliated fast and hard. Goals were raining for TG now -- Saif Al Kaabi followed by Issa Mohammed, and finally, Mohammed Bayat – their back-to-back goals sealed the game with a final score of 7-1.

To support rising talents morally and technically, and ensure their safety, the Sharjah Sports channel honoured Wasit Youth’s player Mohamed Aiman, who was injured during his team’s previous match, where he showed great sportsmanship and supported his team to achieve a great 12-1 win against Talento.