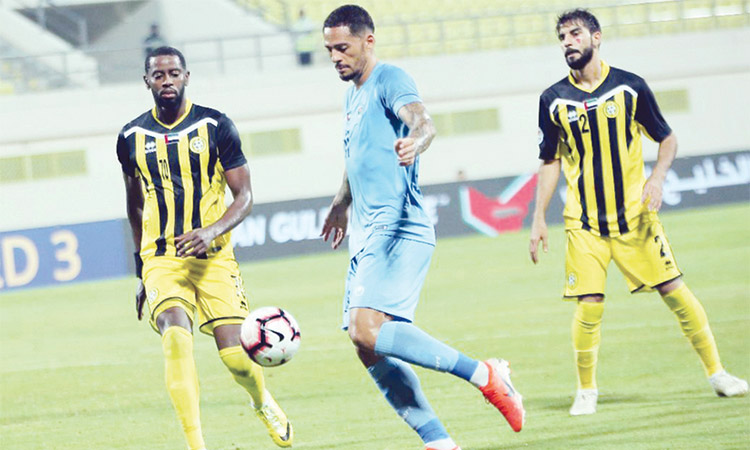 Dibba and Ittihad Kalba players in action during their matchweek 25 AGL game on Thursday.

Dibba have kept their hopes of avoiding relegation from the Arabian Gulf League alive after their valuable 3-1 away win over Ittihad Kalba in matchweek 25 on Thursday.

Giovanni Sio opened the scoring for the home side from a powerful long-range strike in the 24th minute. Six minutes before the break, Yousef Al-Rawashdeh leveled the scoreline for the Sailors.

Three minutes after the one-hour mark, Driss Fettouhi completed Dibba’s comeback, as he converted the ball into the back of the net off a corner kick to put the guests 2-1 up.

Diogo da Silva sealed the win for the Sailors after finding the back of the net in the second minute of injury time.

Following the win, Dibba remain at the bottom of the table but raised their tally to 16 points and reduced the gap with Emirates Club and Fujairah to two points. Meanwhile, Kalba remained 11th on 24 points.

At Ajman Stadium, relegation-threatened Emirates Club fell to a 4-1 defeat against Ajman, with all goals coming in the second half.

Hussain Abdulrahman opened the scoring in the 62nd minute after sending a powerful strike from inside the box and Hassan Zahran doubled their lead three minutes later through an accurate header.

Hassan Abdulrahman made it 3-0 in the 78th minute, before Saad Surour pulled one back for the Falcons in the 85th minute. Only three minutes from time, Mame Thiam added a third goal to seal the win for the Oranges.

Relegation rivals Fujairah failed to capitalize on Emirates’ defeat as they fell to a 3-0 home loss against Al Nasr.

After a goalless first half, Alvaro Negredo found the back of the net in the 67th minute. Mohamed Al Akberi doubled the Blues’ lead only five minutes later and Masoud Sulaiman made it 3-0 deep into injury time.

Emirates Club and Fujairah remain tied on 18 points in 12th and 13th places, respectively. Meanwhile, the Oranges sit seventh on 34 points, one above eighth-placed Al Nasr.

Sheikh Nahyan Bin Zayed Al Nahyan, Chairman of the Abu Dhabi Sports Council, congratulated His Highness Dr Sheikh Sultan Bin Muhammad Al Qasimi, Supreme Council Member and Ruler of Sharjah, for the achievement of the Sharjah Club, for winning the Arabian Gulf League title for the sixth time in its history, its first since 1996.

Sheikh Nahyan stressed that the club’s success in winning the 2018-2019 title is due to support of Sheikh Dr Sultan while stressing that the team deserved to win the league. He congratulated the club, the Sharjah Sports Council and the Football Company, as well as the club’s technical and administrative staff, and its players and fans.

He added that the club won the title due to its professionalism and the support of the administration and fans, and praised its effective planning and confidence in Abdulaziz Al Anbari, who became the first Emirati manager to win the league.

“We are proud of the club’s achievement and its comeback, which will raise the level of competition between other teams next season and support the development of the Arabian Gulf League and Emirati football in general,” Sheikh Nahyan said in conclusion.

Meanwhile, Sharjah’s winning coach Anbari, who took over the reins from Portuguese coach Jose Peseiro in October 2017, not only ended The King’s 23-year-old title drought but also etched a new path for homebred coaches.

“I love Sharjah because it introduced me to the sport and allowed me to glow through them as a player. So, I did not hesitate to take over as I had done so in 2015-16 season as well. The challenge at the beginning was like a long journey in the house where I grew up and learned the crafts of the game,” said a beaming Al Anbari adding that the title was the most important dream he has achieved as a player and as a coach.

“This is like a dream that has turned into reality. We have been together in the past and standing behind us were strong supporters. Many thanks to His Highness Dr Sheikh Sultan Bin Muhammad Al Qasimi, Supreme Council Member and Ruler of Sharjah, for his support,” revealed Anbari, emphasising it was tough as the foreign players left without completing their contacts.

“The management and the players managed to stick together at critical times. In two years, nine foreigners were changed and that was hurting the team badly when I took over.”