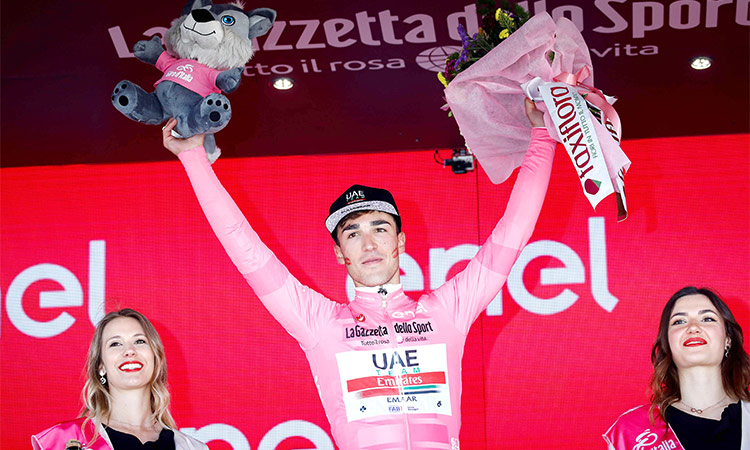 Terracina: Fausto Masnada won the sixth stage of the Giro d’Italia and dedicatd the win to his late uncle while UAE-Emirates’ Valerio Conti grabbed the overall lead to give home fans an unexpected day of double joy on Thursday.

The two men had been part of a 13-man breakaway which was never chased by the peloton. Primoz Roglic, who started the day in the lead, cruised in with the pack 7mins 18sec behind Masnada.

Masnada, a 25-year-old with the second division Italian Androni-Sidermec team, is only in his second Giro was an unlikely candidate to provide a first home victory in this year’s race.

“It was our team’s goal to win a stage.”

Conti was part of the original seven-man escape after 49 kilometres. Masnada, was part of a six-man pursuit that caught the leaders a few kilometres later.

With no long-term threats in the breakaway, the leading teams seemed happy to lend out the pink jersey.

“When the breakaway goes that was the plan,” said Antwan Tolhoek one of Roglic’s Jumbo-Visma team-mates.

“Very, very happy,” he said at the finish. “Repeat, very, very, very, happy.” The two Italians dropped the rest of the breakaway with 29km to go early on the 15km Coppa Casarinelle climb.

While Conti had won one stage in the Spanish Vuelta in 2016 and was better placed in the general classification, Masnada was chasing the biggest stage victory of his career.

Masnada, who looked stronger, briefly tried to shake Conti, but, with the pink jersey awaiting, the UAE man held on grimly.

After a chat, the two worked together until the final kilometre, although Masnada had a scare when he had to swerve to avoid a dog.

By the final kilometre, the pair had 34 seconds over their pursuers and Conti was happy to pull Masnada to the line.

“I was targeting both stage win and the pink jersey but Fausto Masnada is an incredibly strong rider,” Conti said.

“I’m very happy with what I got.” “This is my first time leading a stage race. I’m thrilled.”