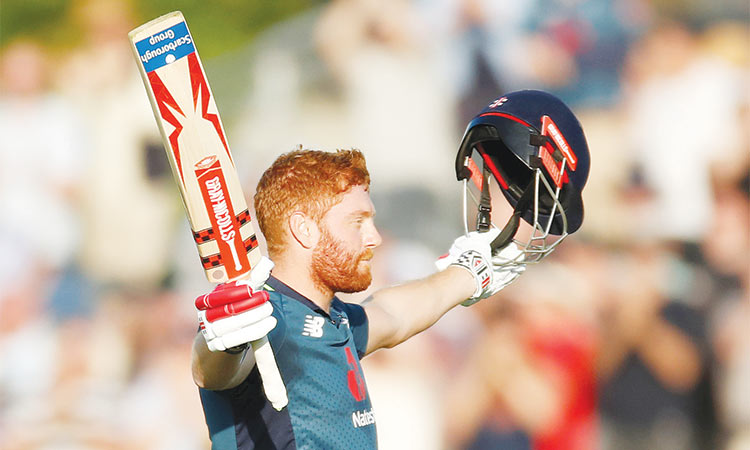 England’s Jonny Bairstow celebrates his century against Pakistan during their third ODI match on Tuesday. Reuters

Bristol: England will have to find a new captain for the fourth one-day international against Pakistan on Friday after skipper Eoin Morgan was banned from the match by the International Cricket Council for a slow over-rate offence.

Morgan was sanctioned after World Cup hosts and favourites England took around four hours to bowl their 50 overs in a six-wicket win over Pakistan in the third ODI at Bristol on Tuesday.

He was also fined 40 percent of his match fee and his players 20 percent of theirs after match referee Richie Richardson ruled England were two overs short after time allowances were taken into consideration.

Meanwhile, Jonny Bairstow said playing alongside the likes of Australia’s David Warner in the Indian Premier League had helped take his game to new heights after his match-winning hundred against Pakistan in Bristol.

Opening batsman Bairstow’s blistering 128 off 93 balls helped World Cup hosts England to a six-wicket win in the third one-day international on Tuesday as they went 2-0 up in a five-match series with two to play. The 29-year-old Yorkshireman carried on his recent form from the lucrative Twenty20 IPL where he scored 445 runs in 10 games at an average of 55.62 for the Sunrisers Hyderabad.

“You’re able to learn different things from different coaches and different players,” said Bairstow, who opened the batting for the Sunrisers with Warner -- set to be an opponent during the World Cup and subsequent Ashes series in England.

“He (Warner) hits in completely different areas to potentially myself. I guess it’s method more than anything else. But learning from them, as well as the guys here, that can only be a good thing playing under pressure with expectation.” Bairstow was furious after his seventh ODI hundred ended when he played on to Junaid Khan, with the batsman hitting out at his stumps.

Pakistan’s defeat showed how once impregnable ODI totals can now be overhauled in modern limited-overs cricket.

It was especially tough on Imam-ul-Haq, whose career-best 151 was Pakistan’s highest individual score against England at this level.