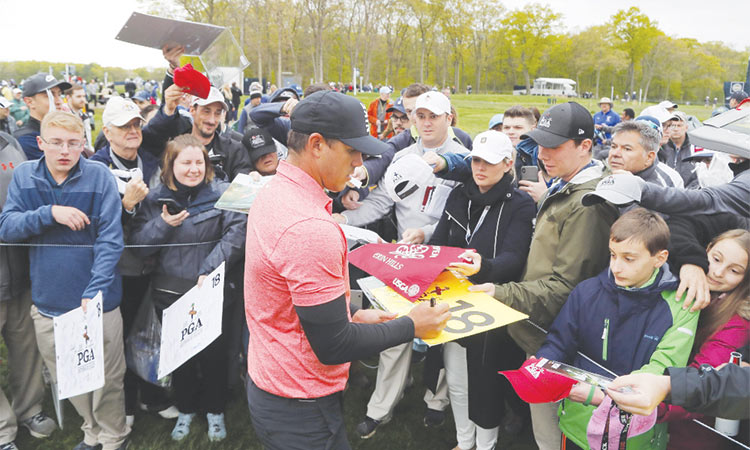 Brooks Koepka signs autographs for fans after a practice round at the PGA Championship on Tuesday. Associated Press

Defending champion Brooks Koepka sees major tournaments such as this week’s PGA Championship as often the easiest events to win and hopes to capture at least 10 before he’s done.

The calm and confident 29-year-old American is already a three-time major winner and has lifted two of the past four major trophies entering this week’s showdown at Bethpage Black.

“I think sometimes the majors are the easiest ones to win,” Koepka said on Tuesday.

“Half the people shoot themselves out of it and mentally I know I can beat most of them, and then from there it’s those guys left, who’s going to play good and who can win.”

That’s why third-ranked Koepka has set his sights on a double-digit major haul, one that would put him no worse than fourth on the all-time major win list and ahead of such legends as Arnold Palmer, Ben Hogan and Gary Player.

“I don’t see any reason it can’t get to double digits,” Koepka said.

“I think you keep doing what you’re supposed to do, you play good, you peak at the right times.”

There are 155 opponents who would see themselves as obstacles, but Koepka knocks down those odds.

“You figure at least 80 of them I’m just going to beat,” Koepka said.

“You figure about half of them won’t play well from there, so you’re down to about maybe 35.

“And then from 35, some of them, pressure is going to get to them. It only leaves you with a few more, and you’ve just got to beat those guys.”

Third-ranked Koepka would become the first player to be back-to-back reigning champion at two majors at the same time by winning this week. He chases a third consecutive US Open triumph next month at Pebble Beach.

“I have the trophy,” Koepka said. “I’m playing really good. The last time we played this championship, I won. I like my chances this week. If I do what I’m supposed to do, then I think I’d be tough to beat. But at the end of the day, you never know what’s going to happen. You’ve got to go out and play four good days.”

Meanwhile, longtime Tiger Woods associate Greg McLaughlin has said the Masters champion should be a contender at this week’s PGA Championship and June’s US Open as he chases Jack Nicklaus’s record haul of major titles because of his familiarity with the venues.

The American will tee off in competition for the first time since his Masters triumph on Thursday at the PGA Championship at Bethpage Black in Farmingdale, New York, where he won the 2002 US Open.

With year’s edition of the US Open back at Pebble Beach in California, where Woods won the title by a record 15 strokes in 2000, McLaughlin believes the 43-year-old will have a distinct advantage at the second and third majors of the year.

“Familiarity with courses is key for him,” McLaughlin, who spent 14 years as chief executive of the Tiger Woods Foundation and now runs the World Golf Foundation, said in a recent interview.

“That’s how he wins at Firestone six times, he wins Bay Hill six times. There’s the term horses for courses and it’s true,” he said.

“So I would assume he’ll be in contention certainly in the next two majors.”

Another long-standing record on the horizon is Sam Snead’s 82 PGA Tour wins — a mark Woods now needs just one more title to match.

“I think he’s particularly focussed on Snead’s record, which is a milestone in anyone’s career,” said McLaughlin, who also manages the World Golf Hall of Fame.

“That record I fully believe he will achieve. That’s important to him as well because it shows a long career of success across several eras of golf.

“So I’m saying Snead’s record for sure, and quite possibly Jack’s record if he can remain healthy and he seems to be doing well with his health.”

Although recovering his health was key to Woods’s success after four back surgeries, McLaughlin felt it was just as important he was in a good space emotionally.

“He seems to be in a great place and I think he feeds off of the support of the crowds and the sponsors and he seems very happy in his life,” he added.

Despite the abundance of talent in the professional game, McLaughlin said Woods, who he first met when he was a 13-year-old kid from Southern California, was a one of a kind.