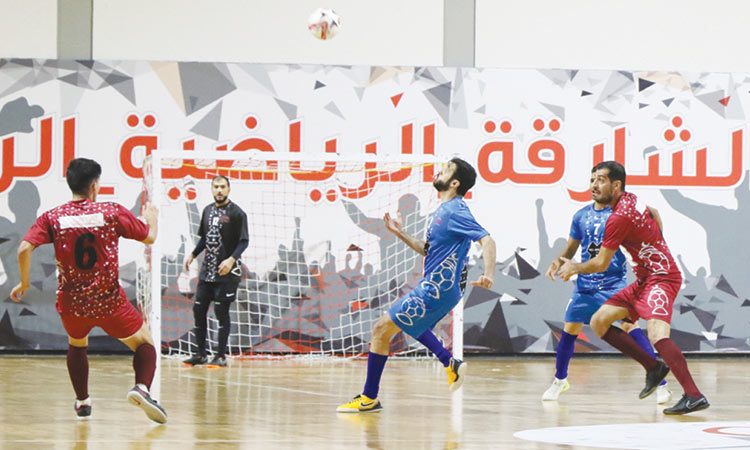 Players in action during a Sharjah Ramadan Futsal Championship match on Tuesday.

Sharjah: Four U-14 teams clashed on the fifth day of the Sharjah Ramadan Futsal Championship (SRFC) to be on the list of qualifiers to the quarter- finals of the championship.

The tournament is being organised by Sharjah Sports channel under the patronage of Sheikh Sultan Bin Mohammed Bin Sultan Al Qasimi, Crown Prince and Deputy Ruler of Sharjah. It tournament will conclude on May 19 at the Sharjah Sports Club Arena Al Hazana Branch.

In the fourth group Khorfakkan was face to face with Sport 4 All. Sport 4 All’s Adel Zouathi netted the ball first, scoring a goal for his team.

In the hard-fought match, Khorfakkan’s Habib Galoum scored a dramatic goal in the last minute of the second half, ending the match in a 1-1 draw. But going by the points table both teams sealed their spots in the quarter-finals.

The first game was between Al Wahdan, which included three hearing impaired players in its ranks, and Al Hamriyah, the topper in its group. In the third minute of the match, Al Hamriyah found the net through the Iranian player Bahroze Bahloul.

In the ninth minute, Mohamed Ashour equalized for his team Al Wahdan. Though there were a number of counter-attacks from both teams, the match ended in a 1:1 draw.

Al Hamriyah earned one point and earned the second position in the group. Al Wahdan bowed out after an amazing performance.

In the next match of the day, Fuhood Zabeel defeated Mofaja’a by 3-2, where audiences witnessed an own goal, while players from both sides continued pressing hard with the game ending in Fuhood Zabeel’s favour.

Al Bahri were up against AJ90 in this qualifier match. In the 8th minute, Al Bahri’s Hamid Rida Naser opened the scoring with a goal, which followed another goal in quick succession. His team-mate scored the third goal, ending the first half 3-0.

AJ90 scored their consolation goal  in the last few minutes of the second half with the team crashing out of the tournament.

The knock-out games during the quarter-finals will kick off with the under 14 category on Thursday. Two matches will be played between Fast and Quattro at 10pm, and TG versus Wasit at 11:05pm.

Friday will mark the second and final day for the quarter-finals, kicking off 4 highly challenging and competitive matches between the winners of all four senior groups, which include Fuhood Zaabeel returning to face Al Bahri at 10:00pm, Al Embrator will take on Sharjah Police at 11:05pm, APL Group and Sport 4 All to clash at 12:10am, concluding with Khorfakkan and Al Hamriya match at 1:15am.