Home hope Fognini sweeps aside Tsonga to advance in Rome 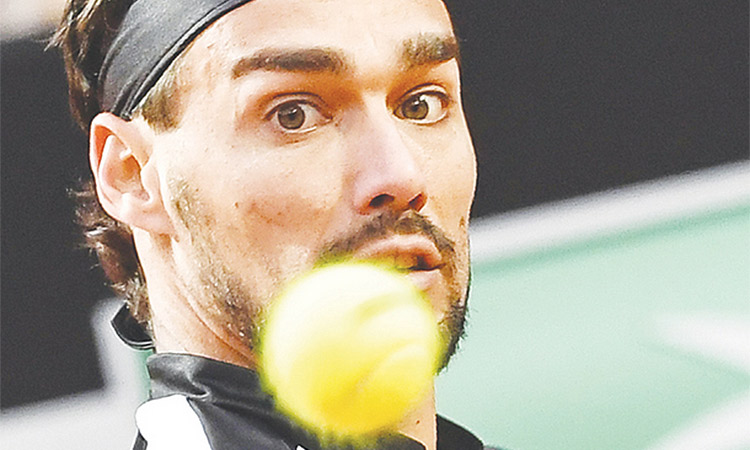 Fabio Fognini eyes the ball as he plays a return to Jo-Wilfried Tsonga during their ATP Masters tournament match in Rome on Monday. Agence France-Presse

Italian Fabio Fognini said he was hoping to do “something big” at home as he beat France’s Jo-Wilfried Tsonga 6-3, 6-4 to advance to the second round of the Italian Open in Rome on Monday.

Tenth seed Fognini, who became the first Italian to triumph at Monte Carlo in 51 years last month, reached the quarter-finals in Rome last year before falling to champion Rafael Nadal in three sets.

“I’m happy, of course, happy because especially for me here, it’s always tough to play,” said the 31-year-old, who came through on the red clay of the Foro Italico in 83 minutes.

“To play a first round against Jo was really tough match, because of course he was injured. He had surgery on the knee.

“At the same time I knew that it could be really dangerous,” Fognini said.

Tsonga, now ranked 92nd, missed much of 2018 after knee surgery. The Frenchman, had won four of the pair’s five meetings, but was broken in each set, with Fognini saving five of the six break points.

Fognini will next play either Moldovan Radu Albot, who beat him at Indian Wells, or French qualifier Benoit Paire. The Italian could break into the top ten for the first time depending on his performance in Rome.

Monfils had his knee bandaged during the second set before being swept aside by 88th-ranked Ramos.

Canadian Denis Shapovalov beat Spaniard Pablo Carreño-Busta 6-3, 7-6 (7/5) to advance to the second round. Shapovalov, 20, will next play world number one and Madrid Open champion Novak Djokovic.

Meanwhile, Serena Williams withdrew from the Italian Open on Tuesday with a recurring left knee injury.

The 23-time Grand Slam champion’s withdrawal comes a day after she beat Sweden’s Rebecca Peterson in straight sets 6-4, 6-2 to set up a third round meeting with her older sister Venus, who needed more than three hours to battle past Belgian Elise Mertens 7-5, 3-6, 7-6 (7/4)..

Serena had been returning after more than two months out with a knee problem.

Former French Open winner Garbine Muguruza warmed up for this month’s clay-court Grand Slam at Roland Garros by easing into the second round of the Italian Open on Monday with a straight sets win over China’s Zheng Saisai.

Muguruza  came through 6-3, 6-4 for her third win over 46th-ranked Saisai this season.

The 25-year-old Muguruza has twice reached the semi-finals in Rome. She next plays either Denmark’s Caroline Wozniacki, the 11th seed, or American Danielle Collins, for a place in the third round. It was not a good day for Chinese players at the Foro Italico with two-time Australian Open champion Victoria Azarenka crushing Zhang Shuai 6-2, 6-1, and next meets two-time defending Rome champion Elina Svitolina.

Former world number one Serena Williams returned from injury to book a rematch with her sister Venus, 21 years after they last met in Rome.