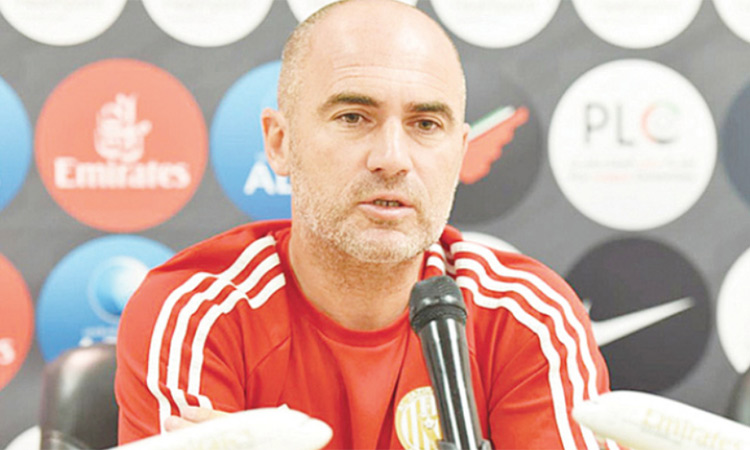 Al Jazira coach Damien Hertog declared it is important that his side not only secure all three points but produce a performance that their fans can be proud of in their final home match of the season.

Al Jazira host Al Dhafra in Wednesday’s Arabian Gulf League clash, knowing victory over their Abu Dhabi neighbours will maintain their third-place position in the league and strengthen their chances of qualifying for the Champions League.

Hertog appreciated the fans support throughout the entire season and asserts their supporters deserve to be treated with attractive and attacking football on display.

“It’s important for everyone in the team to give their best display for the fans and finish the last home match in style,” said Hertog during the pre-match press conference. “It’s not just three points that we want but making our fans proud by playing excellent football, creating chances and scoring goals for them.

“We have scored the most goals this season and that says something about us as we like to play attacking football. The fans enjoy the way we play and we want to combine this by getting a victory.”

He added: “We know three points will boost our chances of qualifying for the Champions League. That is still in our own hands and we will give our best to maintain our position.”

While long-term absentees Mohamed Jamal and Ahmed Rabia are ruled out through injury, Hertog could be without Fares Juma and Salem Al Eidi, who are carrying slight knocks. Top-scorer Ali Mabkhout misses out through suspension.

Despite having a near full-strength squad, Hertog said his players will not take Al Dhafra lightly especially after losing to them earlier in the season.

“I expect a tough game against Al Dhafra,” said the Dutchman. “They beat us before earlier in the season and that gave them a lot of confidence for the rest of the season. They reached the President’s Cup final but I am confident if we can play really well we can beat them.”